From the Collections: The Josef Fenneker Collection of the Deutsche Kinemathek

In this series we present collections which can be found in the Deutsche Digitale Bibliothek (German Digital Library), and in this way give an insight into the diverse objects of our partner institutions. We begin with the Josef Fenneker Collection of the Deutsche Kinemathek.

Since 1963, the Deutsche Kinemathek – Museum für Film und Fernsehen  (Museum of Film and Television) in Berlin has been collecting everything that belongs to German film and television history – from the pre-mortem bequest of the director Werner Herzog up to the estate of Marlene Dietrich. In addition, it houses the almost complete surviving inventory of film posters by Josef Fenneker. This includes around 340 posters and numerous original poster designs whose condition, however, is already so fragile in parts, that the originals can no longer be presented to the public in their entirety. It is therefore all the more important that they can be admired in digital form in the Deutsche Digitale Bibliothek. 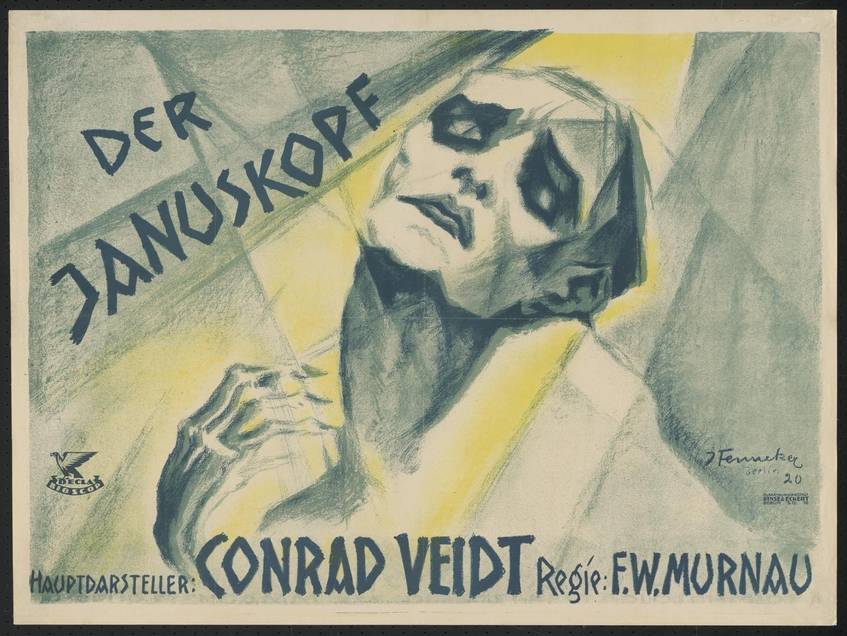 Born in Bocholt (North Rhine-Westphalia) in 1895, Josef Fenneker’s drawing talent was already certified on his school leaving certificate. But for all that, he had to interrupt his studies at the Academy of Arts in Munich when he was drafted into military service in 1915. In 1917, before the end of the First World War, Fenneker was discharged after being wounded and promptly took up his studies again at the Lehranstalt des Kunstgewerbemuseums (School of the Museum of Decorative Arts) in Berlin.

Josef Fenneker’s artistic work began with the creation of film posters. From 1918 onwards, commissioned by the newly-founded Universum Film AG, better known as the Ufa, he began to design posters for Berlin cinemas. He not only aroused the interest of the public with these, but also that of Siegbert Goldschmidt, the director of the Marmorhaus cinema on the Kurfürstendamm. Goldschmidt brought the young artist to his cinema in 1919.

A six-year creative phase began for Fenneker with this, which was not only characterised by productivity, but also by innovation. The German silent film experienced a heyday with the cinema of the Weimar Republic and the demand for film posters grew steadily. Eighty per cent of Fenneker’s graphic drawings, that was a total of 364 posters, were created between 1918 and 1925. Fenneker mixed Art Deco elements with those of Expressionism and in this way created unusually expressive, experimental, partly abstract film posters, which transcended the boundaries between commercial graphics and art. 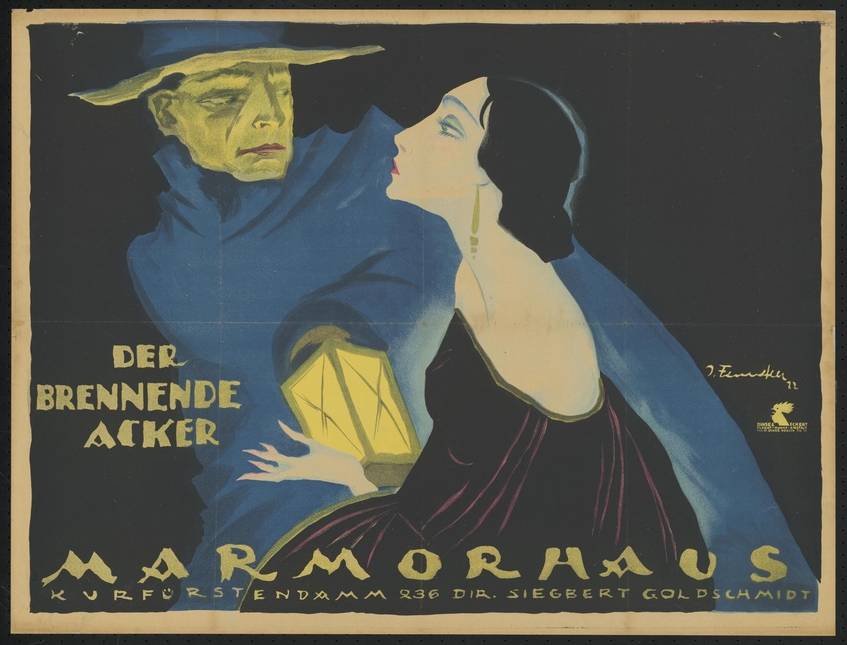 Expressionist elements, figures with expressive body language and watercolour-like brushstrokes, often on a black background, became a signature feature of Fenneker’s poster art. His designs were always atmospheric, often disturbing, but despite this they made people curious about the film being advertised. Due to the fact that their figures were staged in new contexts, even films which were rather conventional aesthetically had a special appeal thanks to Fenneker. He created images which impressively captured the horror of the early gothic films, the modernity and erotic fascination of the young cinema and which, just like the films, caught the spirit of the time.

But that wasn’t all: Fenneker was commissioned by Goldschmidt to be responsible for the artistic redesign of several cinemas in Berlin, and from 1920 to 1922 he was the artistic director of the Luna Park in Berlin-Halensee, the largest amusement park in Europe at that time. As early as 1924, Siegbert Goldschmidt was nevertheless on the brink of financial ruin: the Marmor Theatre had to close and Fenneker lost his most important employer. And Fenneker was also suddenly less in demand with other cinema operators – his experimental style of drawing was not considered to be very suitable for conventional advertising. In 1925, for instance, he only designed eight film posters.

From 1928 onwards, Fenneker increasingly began to create stage sets for revues and theatre performances. In addition, he made fashion drawings for various magazines. But Fenneker also remained faithful to films and designed film posters and film sets. His style of drawing became more pleasing: expressionist-angular lines were rounded off, expressivity was replaced by elegance and he dispensed with eerie elements, even in horror films. 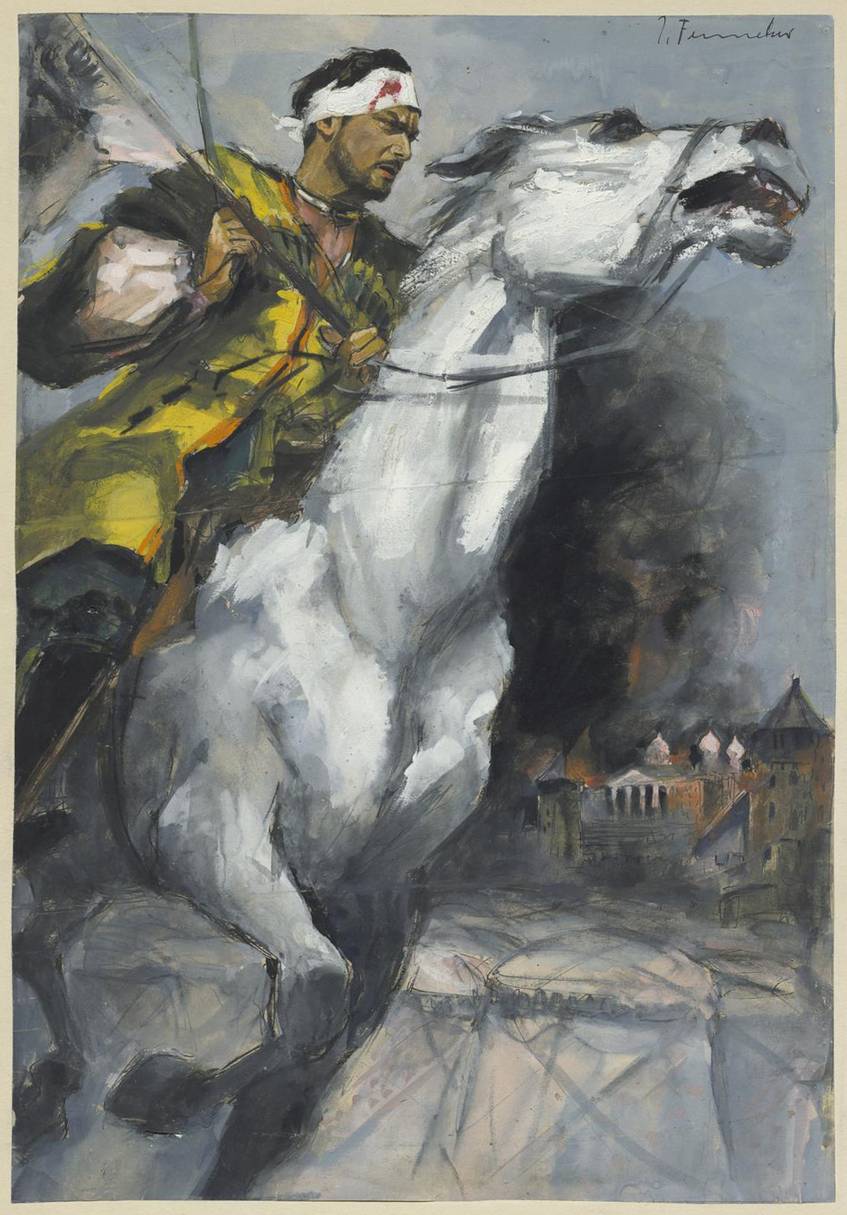 Fenneker remained active as a stage designer and poster artist during the National Socialist era. Even though he did not become a member of the NSDAP (Nationalsozialistische Deutsche Arbeiterpartei – National Socialist German Workers' Party [Nazi party]) and never expressed his political views in public, he adapted ideologically and stylistically to the change in power. He now moved away completely from the expressionist style of his early drawings. Instead, he used broad brushstrokes, rich opaque colours and reproduced his motifs in an almost photo-realistic way. His posters were now reminiscent of static oil paintings – the dynamics of his early designs only rarely shone through. He devoted himself thematically, above all, to non-political entertainment films. Moreover, he became a member of the “Reichskammer der bildenden Künste” (“Reich Chamber of Fine Arts”), expressed himself polemically on his aesthetical ideas in the “Völkischer Beobachter” (newspaper of the Nazi party) and was marketed as a “German propaganda artist”. From the middle of the 1930s, Fenneker devoted himself increasingly to the theatre and worked at the Schiller Theatre in Berlin from 1938 onwards. 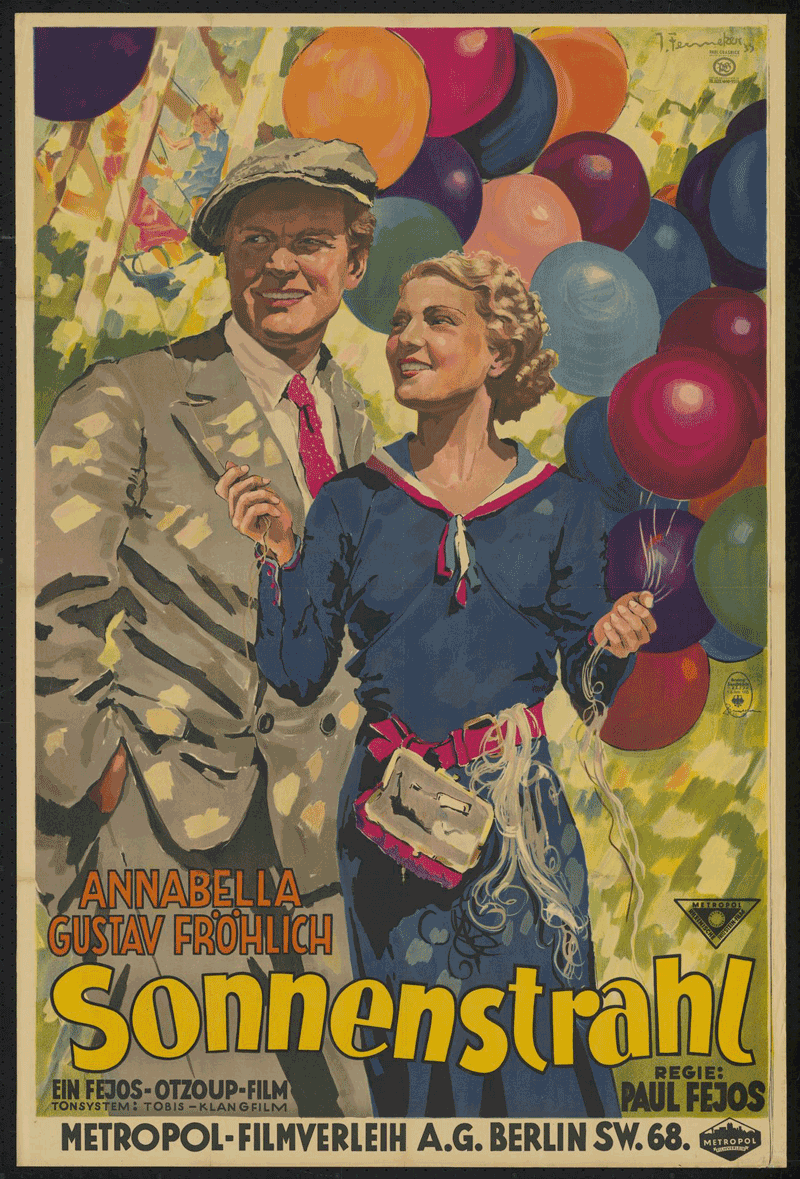 His adapted attitude during the National Socialist era did not get in the way of Fenneker continuing his career as a stage designer after the end of the Second World War. Now, he not only worked in Germany, but also took on guest assignments in Stockholm, Helsinki or Milan. He only designed film posters for “Affaire Blum” (“Blum Affair”) (1948) and “Hoffmanns Erzählungen” (“The Tales of Hoffmann”) (1951). In 1956, Fenneker died in Frankfurt am Main at the age of 60. His poster art was not mentioned in his obituary – he remained in the public’s memory first and foremost as a stage designer. In the meantime, Fenneker’s poster works have come back into the centre of collective attention and are closely connected with the visual heritage of the Weimar cinema.