With the help of two of the Coding da Vinci scholarships, the team of “How To: Spiele zur Kunst” (“How To: Games on Art”) is working at full steam on the completion of a new framework for their ambitious art education app. For that which began as “Horizonte” (“Horizons”) at Coding da Vinci Saar-Lor-Lux 2020 is now an elaborately designed concept application, which allows all museums of fine arts which are eager to try out new things, to communicate the creative work of the artists they exhibit to a young and young at heart public in a very contemporary manner. 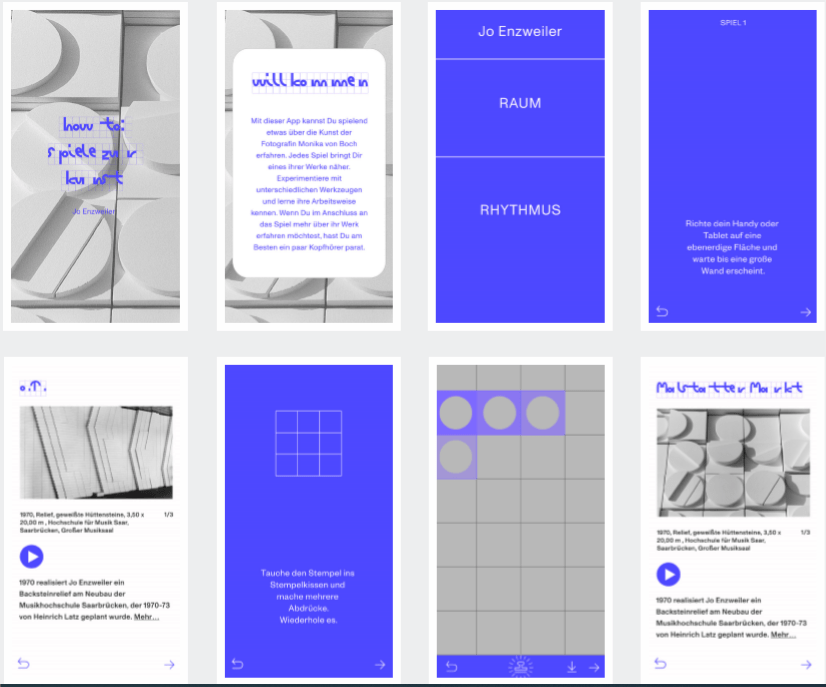 If “Horizonte”, as an individually designed prototype, still devoted itself to a playful approach to Jo Enzweiler’s art, then the follow-up application makes it possible to embed different contents into a modest, clearly structured framework. And so the “new” app is now also called “How To: Spiele zur Kunst”. The name of the artist appears in the subtitle of the corresponding “How To” edition.

With this, the team consisting of the developers Katja Rempel and Catharina Grözinger as well as the art scholars Nina Jäger and Sandra Kraemer has already taken a great step in the direction of “Proof of Concept”, for it is the aim of their scholarships to create a framework, which is reusable both in terms of design and technology, that can serve as a communication of various art genres and artists.

In this interim report, the four scholarship holders give us an insight into their work (PDF document in German).

Try out art techniques yourself in a playful way

The team has tried out the current version of “How To: Spiele zur Kunst“ with the support of the Saarlandmuseum (Saarland Museum) and the Institut für aktuelle Kunst im Saarland (Institute for Contemporary Art in the Saarland), where the project team was allowed to have access to the works  of and information collected around the photographer Monika von Boch. The result was a technically competent examination, demanding in terms of content, concerning, in particular, “how” the artist had worked with her material. The users of the app can actively reconstruct “How to” do this, for example by taking photographs themselves and then editing these photos with the means deliberately chosen by the developers. Just like Monika von Boch could have done.

“How To: Spiele zur Kunst” presents itself modestly with reference to the process and framework design. The design should leave room for the work of art, which is the focal point of the app. The process begins with the launch screen, in which random motifs appear; then there is a general introduction to the app and after that a menu appears as the entry point for the individual games. The games are assigned to thematic focal points and begin with an introductory question, which is followed by the quotation of an artist as the answer. Then it goes to the game with which the respective topic is “played”; in the end, the description of the work on the work of art “played” is offered for reading.

The CdV scholarships are funded by the digital culture programme of the Kulturstiftung des Bundes (German Federal Culture Foundation).