From the Archivportal:"Focus on – The KAPD"

In the section “Im Blickpunkt” (“Focus on”), we present special highlights from archives represented in the Archivportal-D. These selected archival documents give an insight into the holdings and offer research suggestions for a possible search in the Archivportal-D or in the theme portal “Weimar Republic”. This month, we are pleased to present a scientific contribution by  Rhena Stürmer from the European University Viadrina with sources from the Landesarchiv Baden-Württemberg (State Archives of Baden-Wuerttemberg) and the Bundesarchiv (German Federal Archives).

In April 1920, the Kommunistische Arbeiterpartei Deutschlands (KAPD – Communist Workers’ Party of Germany) was founded, a party to the left of the KPD (Kommunistische Partei Deutschlands – Communist Party of Germany). For a short while, two communist parties existed in Germany, which struggled for the leading role within the labour movement. The primary objective of the KAPD’s political activities was “to develop the self-awareness” of the proletariat. The 1920 programme of the KAPD can be read here°.

The party’s theory and ideology were based on the reflections of the Dutch council communists Anton Pannekoek and Hermann Gorter as well as on grassroots-democratic spontaneist perceptions, such as those advocated by Rosa Luxemburg. The organisational ideal of the left communists was the direct representation of the working class in councils and company organisations.

They rejected a form of democratic participation by means of a parliament. The task of the party was to merely have an organisational and structuring effect to bring together the forces of Council Communism as well as to coordinate training and propaganda measures, while the trade union councils - combined organisationally in the “Allgemeine Arbeiter-Union” (General Workers’ Union) – should serve as a grassroots-democratic platform for forming the proletarian will.
The protagonists clearly distanced themselves conceptually from the other left-wing parties like the SPD (Sozialdemokratische Partei Deutschlands – Social Democratic Party of Germany) and the KPD, even though there were sometimes joint political actions on a local basis.

The members of the KAPD considered themselves to be Marxists, but rejected the model character provided worldwide for many communists by revolutionary Russia after 1917.

KAPD officials, amongst these Karl Schröder, Alexander Schwab and Bernhard Reichenbach, travelled to Moscow several times for negotiations with the Bolsheviks. At first, they were also delighted at the revolutionary upheaval and, in 1920, they were admitted into the Third International (Comintern) with the status of a sympathising party. However, they soon distanced themselves, criticised the Bolshevik Party’s centralised concentration of power to the detriment of wage earners and, finally, called the socialistic character of the Soviet Union into question as such. In turn, Lenin rebuked the left communists as left dissenters in his paper “Left-Wing Communism: An Infantile Disorder”,  which was published in 1920.

The KAPD was involved in the March Battles in Central Germany in March 1921. 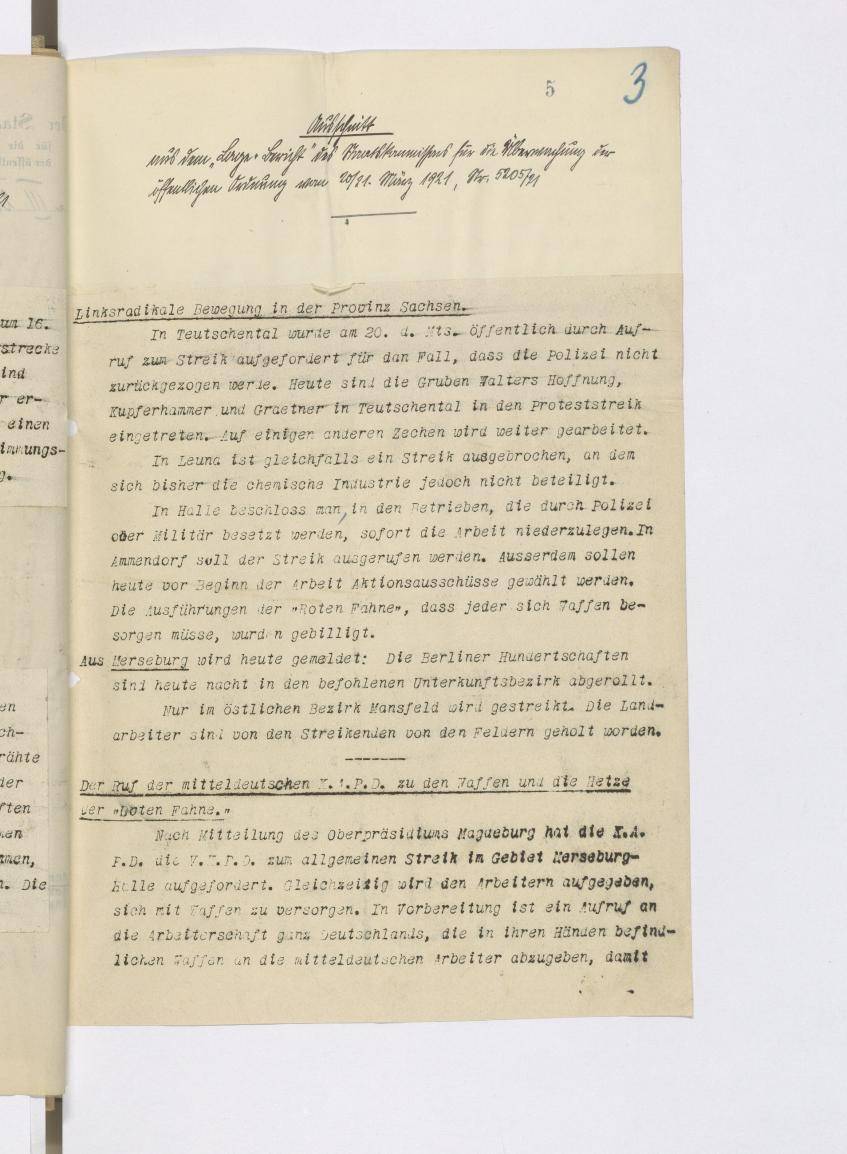 "Nach Mitteilung des Oberpräsidiums Magdeburg hat die K.A.P.D. die V.K.P.D. zum allgemeinen Streik im Gebiet Merseburg-Halle aufgefordert. Gleichzeitig wird den Arbeitern aufgegeben, sich mit Waffen zu versorgen. (…)” (“According to Police Headquarters in Magdeburg, the K.A.P.D. has called for a general strike by the V.K.P.D in the Merseburg-Halle area. At the same time, the workers have been encouraged to supply themselves with weapons. (...)") – Extract from the “Lage-Bericht” (“situation report”) of the Imperial Commissioner for the Monitoring of Public Order, p. 5. BArch R 601/623

The party endeavoured to expand its structures, also on an international level, where it tried to establish an alternative to the Comintern with the Kommunistische Arbeiter-Internationale (KAI – Communist Workers’ International) 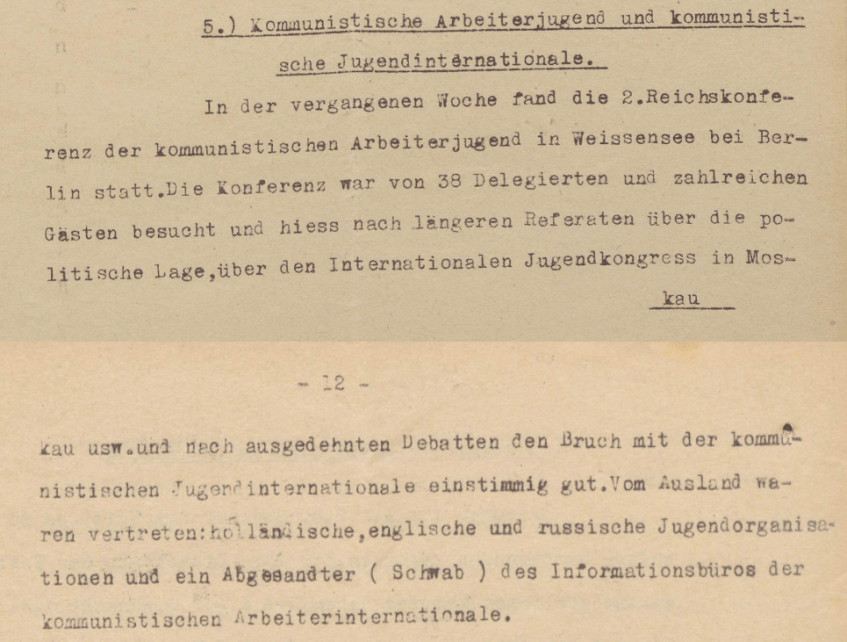 State repression and internal divisions in different directions, a general abatement of the revolutionary episode and the increasing competition from the KPD, which had become the party of the masses due to its consolidation with the USPD (Unabhängige Sozialdemokratische Partei Deutschlands – Independent Social Democratic Party of Germany), finally paved the party’s way to insignificance.  The heyday of organised Left Communism in Germany ended in 1923. It was just as much a product of its time as many other left groupings and organisations, which established themselves in a time of self-discovery within the new framework conditions of the Weimar Republic and which soon disintegrated again.

But this did not mean that the protagonists disappeared into insignificance. Those who had assumed party political duties as officials remained politically active for the rest of their lives in the Left Communist movement, whether as journalists, writers or political (youth) educationalists – for which they not infrequently used the existing structures of the SPD.

At the end of the 1920s, the left communists brought their forces together once again and out of the “Sozialwissenschaftliche Vereinigung” (SWV – German Social Science Association), once founded by Paul Levi, there emerged the “Rote Kämpfer” (“Red Fighters”). They formed an extensive network of left communist discussion contexts, in whose courses the economic development in Germany, the rise of National Socialism and the increasing Stalinisation of the Soviet Union were critically discussed and the possibilities of political influence reviewed. 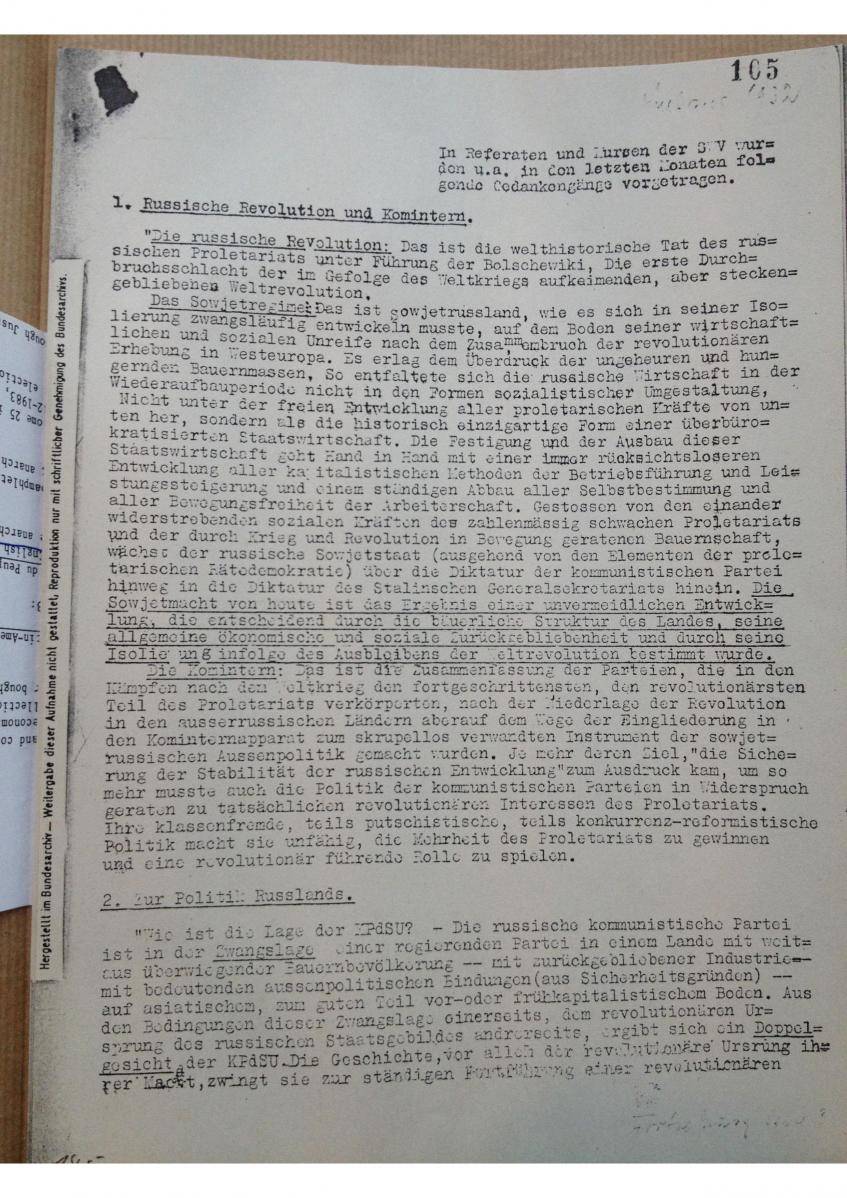 From 1933 onwards, the group was forced into illegality, whereby the work was also successful at first due to good preparation. In 1936, the “Rote Kämpfer” – whose membership in the meantime had now increased to an estimated 400 members – were discovered by the Gestapo. Numerous members were sentenced to many years in prison and camps in the subsequent trial on the grounds of the preparation of high treason.

Many thanks to  Rhena Stürmer from the European University Viadrina for making this available.

You can find objects on the KAPD in the Deutsche Digitale Bibliothek (German Digital Library) here.

Links to the sources in the theme portal

Lagebericht des Reichskommissars für Überwachung der öffentlichen Ordnung, Nr. 62a (Situation reports of the Imperial Commissioner for the Monitoring of Public Order, No: 62a)

If you are interested in further sources on the  Communist Workers’ Party of Germany (KAPD) in the German Empire, select Kommunistische Arbeiterpartei Deutschlands from the  A–Z Index  and combine this thematic keyword with the geographical reference Deutsches Reich (German Empire).

You can find further sources on the keywords Kommunistische Arbeiterpartei Deutschlands, Arbeiterbewegung (Labour Movement) and  Internationalism in the object gallery on the homepage of the  theme portal.