From the Archivportal: “ Focus on – The Assassination of Kurt Eisner”

The growing discontent with the monarchy in Bavaria in the course of the First World War also formed the basis here for the November Revolution. Ludwig III was deposed on 7th November 1918 and a free state was established, organised by Kurt Eisner (14th May 1867 – 21st February 1919), the Bavarian Chairman of the Unabhängige Sozialdemokratische Partei Deutschlands (USPD).

Under his leadership, a council of workers, peasants and soldiers was established in the Bavarian state parliament as well as a provisional nation council, in which Eisner became the prime minister and the foreign minister. In his period of office, successes to be mentioned are the introduction of the eight-hour day, the initiation of women’s suffrage as well as the abolition of the religious supervision of schools. With his publication of the Bavarian emissary reports at the end of November 1918 with respect to the outbreak of the First World War, he wanted to prove the war guilt of the German Empire, and in this connection he warned against the premature release of German prisoners of war at an international congress in 1919. This antagonised in particular right-wing conservative circles, which threatened him and called him a traitor.

At the state parliament elections on 12th January 1919, the USPD lost the greater part of their votes and Eisner was forced to resign with his provisional government. On the way to the inaugural meeting of the newly elected state parliament on 21st February 1919, where Kurt Eisner was going to announce his resignation, he was assassinated by the reserve lieutenant Anton Graf von Arco auf Valley (1897-1945). The political murder provoked riots in the Bavarian state parliament, in the course of which two other persons lost their lives. 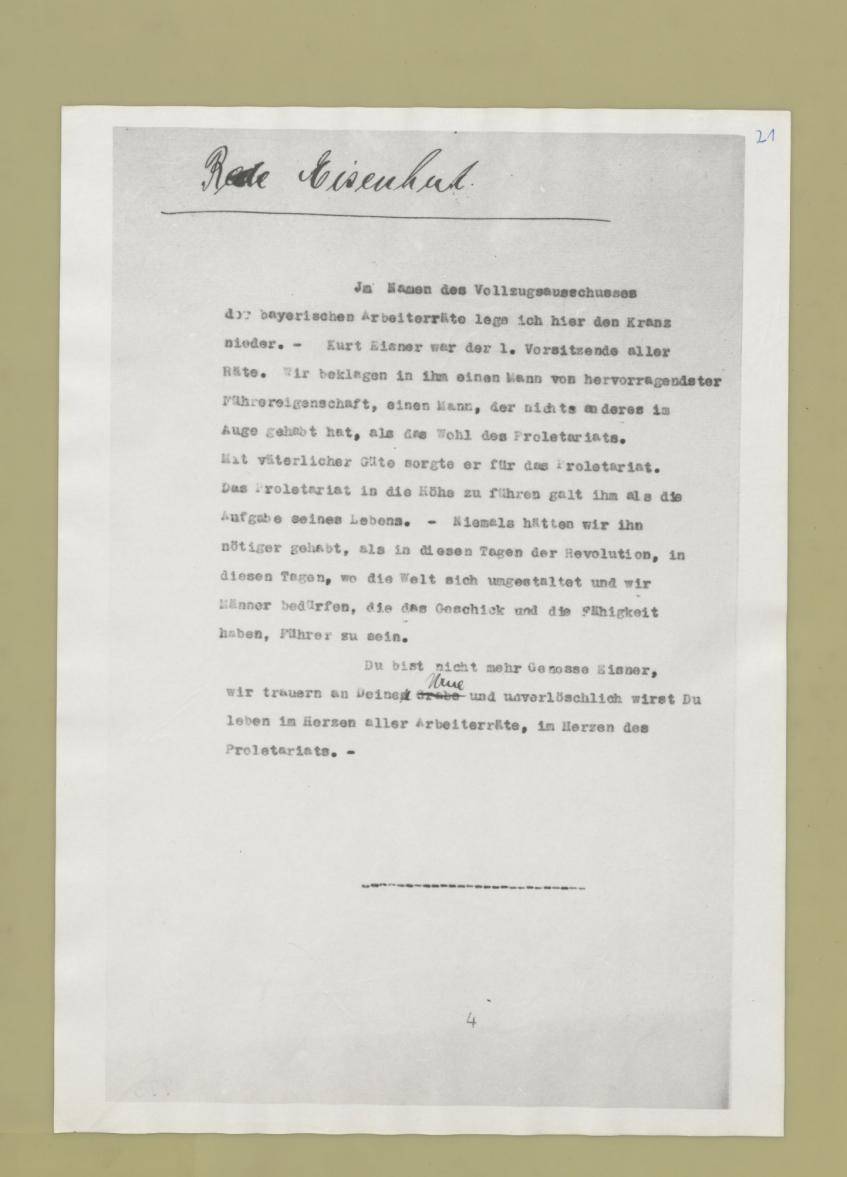 "(...) Kurt Eisner war der 1. Vorsitzende aller Räte. Wir beklagten in ihm einen Mann von hervorragender Führerschaft, einen Mann, der nichts anderes im Auge gehabt hat als das Wohl des Proletariats. (…) [(…) Kurt Eisner was the first chairman of all the councils. We mourn him as a man who was an outstanding leader, a man who had nothing else in mind than the welfare of the proletariat (...)]" – Eulogy for Kurt Eisner, given by Hermann Eisenhut, Member of the Revolutionary Workers’ Council in Munich, Feb. 1919. BArch, SGY 10/30.

In the following weeks, the disputes between the advocates of a parliamentary democracy and a socialist soviet republic led to further disputes. On 7th April 1919, the workers‘ councils proclaimed the Münchener Räterepublik (Munich Soviet Republic), which was overthrown bloodily only one month later by right-wing nationalist troops of the Imperial Government and from Wuerttemberg as well as several “Freikorps” (volunteer free corps).

All Objects relating to Kurt Eisner in the Deutsche Digitale Bibliothek

If you are interested in further sources on the assassination of the politician Kurt Eisner, select "Politischer Mord" ("political murder") in the A-Z index and combine this thematic keyword with the geographical reference "Freistaat Bayern" ("Free State of Bavaria").

You can find further sources on the keywords "Politischer Mord", "Münchener Räterepublik" and "Unabhängige Sozialdemokratische Partei Deutschlands" in the object gallery at the bottom of the theme portal’s homepage.