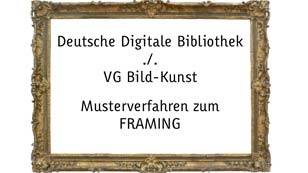 The Deutsche Digitale Bibliothek (DDB) filed an action with the Regional Court of Berlin against the art royalties collective society Verwertungsgesellschaft Bild-Kunst (VG Bild-Kunst) at the beginning of May (Landgericht Berlin, case number: 15 O 251/16). The dispute is based on the issue of the extent to which collective societies may require their licensees to protect licensed online content against Framing by technological means. Both parties aim to have the issue resolved in principle. That is why they have brought the dispute before the court as what is called ‘model case proceedings’.

We, the Deutsche Digitale Bibliothek, cross-link the digital stock of cultural and scientific institutions in Germany and provide central access to them in order to provide free access to digitalised museum exhibits, books, musical works, monuments, films, deeds and other cultural treasures via the Internet, thus contributing to the democratisation of knowledge and resources. As a network, we link and exhibit our partners’ digital contents. Up to now, as many as 2,322 cultural and scientific institutions have registered and 267 of them have already provided us with almost 20 million records. They all benefit from the 'online window dressing’ of the Deutsche Digitale Bibliothek.

Our aim is, while respecting copyright, to make even protected works accessible to the wider public. Therefore, we have entered into negotiations for a licensing agreement regarding depictions of works of fine art of which the collective management of rights is incumbent on VG Bild-Kunst. In general, VG Bild-Kunst is open-minded towards our concern. We negotiated a master agreement with VG Bild-Kunst quite soon, not only allowing us to display the entire portfolio of depictions of works of fine art in a good resolution (up to 1,400 pixels) for an appropriate licence fee, but also which would have allowed our partners to do so on their own pages as well.

However, VG Bild-Kunst decided in the meantime that licensing requires us to take technical measures that make it impossible for third parties to integrate the content we display into their own website by using a frame. Even our partners could only use the advantages under the master agreement, which was negotiated for their benefit also, if they took such protective measures.

At the beginning of May of this year, we filed an action against Verwertungsgesellschaft Bild-Kunst with the Regional Court of Berlin (Landgericht Berlin, case number: 15 O 251/16). The dispute is based on the issue of the extent to which Verwertungsgesellschaft VG Bild-Kunst may require their licensees to protect licensed online content against framing, where content is integrated (framed) in third party websites by technological means.

VG Bild-Kunst makes the application of technical measures to prevent framing a prerequisite for a valid licence agreement, vis-à-vis not only ourselves but any institution contacting VG Bild-Kunst in order to obtain a licence to use depictions of works of fine art protected by copyright (cultural and scientific institution).  That is why the core issue is of such fundamental importance.
The proceedings are of fundamental significance to VG Bild-Kunst as well. If it cannot obligate its contracting partners to protect the depiction of works of fine art against framing, then third parties might integrate the contents displayed with a licence into their websites by framing, even without obtaining a license beforehand from VG Bild-Kunst for the display created by means of framing.

Therefore, we have decided, together with VG Bild-Kunst, to obtain a decision of principle by a court on the issue of making it a prerequisite of a valid licence agreement that a technology to prevent framing is implemented. Such a decision will also be of decisive importance to other German museums, libraries and archives exhibiting and disseminating depictions of works of fine art protected by copyright on websites.

Due to the utmost importance for other cultural heritage institutions, the German Museums Association Deutsche Museumsbund e.V. has decided to support the proceedings not only as regards content, but also with funds. This also applies to the Hamburg historic museums foundation Stiftung Historische Museen Hamburg and the Prussian Palaces and Gardens Foundation Berlin-Brandenburg Stiftung Preußische Schlösser und Gärten Berlin-Brandenburg.

The decision on the issue disputed in the proceedings must take account of the fact that, according to the established case law of the Court of Justice of the European Union, framing is – under certain conditions – not an act of use relevant under copyright law, namely, if no access restrictions are circumvented by means of the hyperlink. The BestWater International decision of the European Court of Justice confirmed said case law in October 2014  (CJEU, C 348/15 – BestWater). The court’s core argument is that framing did not address a new audience and therefore it did not constitute communication to the public nor the creation of accessibility to the public. The German Federal Court of Justice implemented the decision of the European Court of Justice in its judgment Die Realität II of 9th July, 2015 into German law (BGH, case number: I ZR 46/12 – Die Realität II).

VG Bild-Kunst’s legal opinion is that making a request for technological measures to prevent framing a condition in a contract should be accepted because of recent case law, and because it would be impossible to grant new licences otherwise, and that  framing should be prevented.

From a legal point of view, the question arises as to whether we (and other potential contracting partners) are entitled to claim under Section 11 of the German Copyright Management Act (Urheberwahrnehmungsgesetz) that VG Bild-Kunst conclude a licence agreement with appropriate conditions with us without insisting on technical measures to prevent framing by third parties.

With regard to the aforementioned case law, we are of the opinion that it would be unreasonable to prevent an act that is not relevant under copyright law, i. e. framing by third parties, through costly technological measures.

The situation is particularly delicate if, should we want to restrict the prevention of framing to the relevant content (depictions of protected works of fine art), in order not to contradict our unrestricted software architecture, which indeed is intended to enable re-use by third parties (innovation) and the development of mobile applications, we would also have to ensure that only content covered by VG Bild-Kunst is “protected” against framing. This again would take a lump-sum agreement with a collective society ad absurdum, for such an agreement is intended to render dispensable individual arrangements for each single case and the identification of individual content protected by copyright – which can hardly be implemented anyway.

Furthermore, in view of recent case law, no claim for remuneration arises from framing on the merits. The right holders represented by VG Bild-Kunst cannot lose any earnings they are not entitled to. They are entitled to receive remuneration for those uses relevant under copyright law that are connected with making protected material available, such as provided by us or by our partners, who do not rely on link technology but store content and make it available themselves for reasons of performance and stability of their own content.

We still aim at the conclusion of a master agreement incorporating appropriate conditions. The proceedings before the Regional Court of Berlin will make it clear, from a legal point of view, if the "framing prevention technology" may indeed be a prerequisite for such an agreement.