The Digital Horizon 04: "The Digital German Women’s Archive: A Commemoration of the Women’s and Lesbian Movements"

In a series of guest contributions, we will present exciting topics and projects of data and cooperation partners of the German Digital Library in the future: be it a new way of approaching a specific stock or a historical epoch, be it a new virtual exhibition or a special digitalisation project. What is the idea behind this? We wish to provide a view beyond our digital horizon and gladly allow our readers to take part in it!

In today’s (fourth) article Susanne Diehr, the representative of the Management Board, will present the Digitales Deutsches Frauenarchiv (Digital German Women’s Archive), an interactive specialist portal on the history of women’s movements in Germany, which went online in September for the anniversary year of “100 years of women’s suffrage”.

The Digital German Women's Archive: A Commemoration of the Women's and Lesbian Movements

Since 13th September 2018 the history of the lesbian and women’s movements has had a new address on the web: Das Digitale Deutsche Frauenarchiv (DDF). Women make history: this is the message of the DDF on the current anniversary of ‘100 years of women’s suffrage’.  The portal was opened by the Federal Minister Dr. Franziska Giffey. 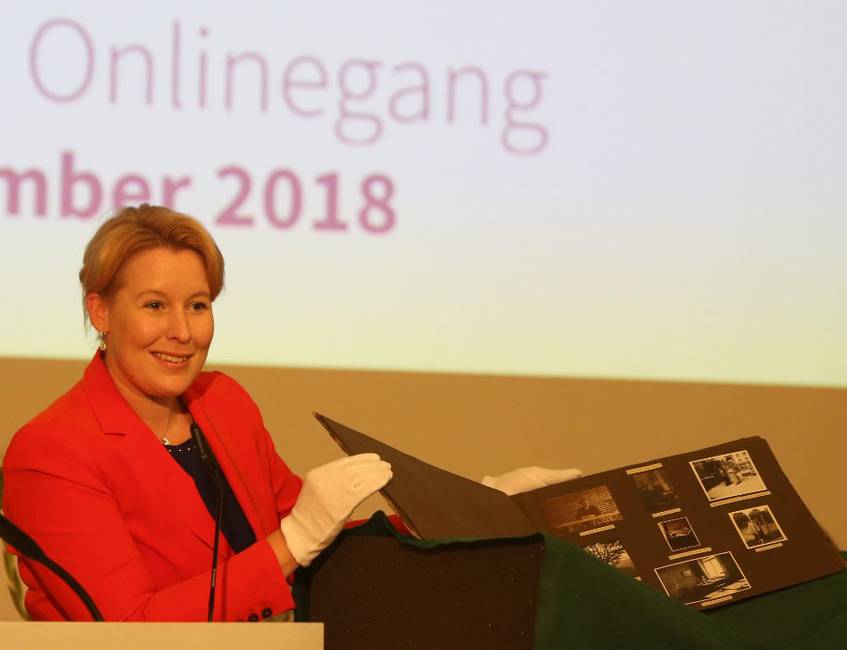 The online launch of the DDF took place on a historical evening, exactly 50 years to the day after the “tomato throwing”: on 13th September 1968 tomatoes were thrown at the speaker’s lectern at a delegates’ congress of the Socialist German Student Union in Frankfurt/Main. An action which made history. It marks one of the beginnings of the New Women’s Movement. But such actions were (and are) not necessarily “of archival value”. And so documentation centres and archive movements were founded to document their own actions and, finally, also to rediscover the history of the historical women’s movement, which had disappeared from cultural memory due to the breach in civilisation caused by National Socialism.

The fact that the anniversary of 100 years of women‘s suffrage is remembered and celebrated in many ways today is therefore also a success for feminist remembrance work, which emerged in the course of the New Women’s Movement.

The organisation responsible for the DDf is the i.d.a.-Dachverband (i.d.a. umbrella organisation). The network i.d.a. (inform, document, archive) has been working together since 1983, as a non-profit organisation since 1994. The i.d.a. members began their collection and documentation activities in the course of the New Women’s movement. Today 41 lesbian/women’s archives, libraries and documentation centres from Germany, Austria, Switzerland, Luxembourg and Italy work together in the i.d.a. Collectively, they possess extensive holdings on activists and organisations in the different phases of women’s movements and regional trends. The digital preservation and presentation of material is part of the archival work today. For this reason, the history of women’s movements now has a new address on the web.

Since July 2016 the establishment and the expansion of the DDF has been supported by the Federal Ministry of Family Affairs, Senior Citizens and Youth (Bundesministerium für Familie, Senioren, Frauen und Jugend (BMFSFJ)). The META database was established as early as 2012, by means of which research can be done online in the holdings of the i.d.a. institutions since 2015. The META has been integrated in the DDF portal since 2016 and developed further.

As the most successful social movement of the 20th century, the women’s movement is ready for the history books – yet it has hardly arrived here. It is the aim of the DDF to embed themes, campaigns and successes of the Old and New Women’s Movements in the cultural memory.

i.d.a. institutions receive funding for digitisation projects via a project fund and accordingly provide the material presented on the DDF portal. Special treasures illustrate the potential of digitisation. Thus, for example, it is possible to scroll through the diary of the activist and politician Minna Cauer who, as a representative of the radical wing of the women’s movement, campaigned for women’s suffrage. 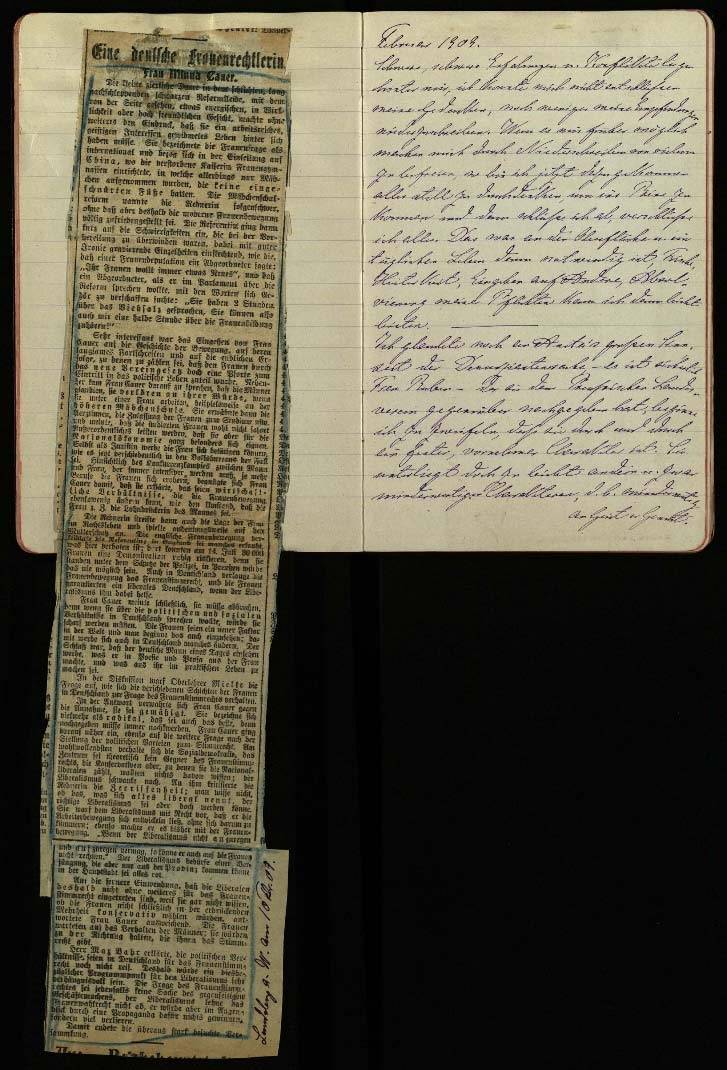 Or a photo album by Alice Salomon, the founder of social work in Berlin, which gives an insight into her work. This is also a particularly special item because there are not many personal possessions of Alice Salomon still in existence. She was stripped of all her offices by the National Socialists and forced to emigrate. The original is only presented in exceptional cases such as, for example, at the online launch of the DDF by Federal Minister Giffey (see photo above). The DDF and the database META integrated within it now enable anyone and everyone to scroll digitally through the album.

One speciality of the digital archive is also the protagonist network. It presents the connections between protagonists of the women’s movement and is an interactive navigation facility at the same time. 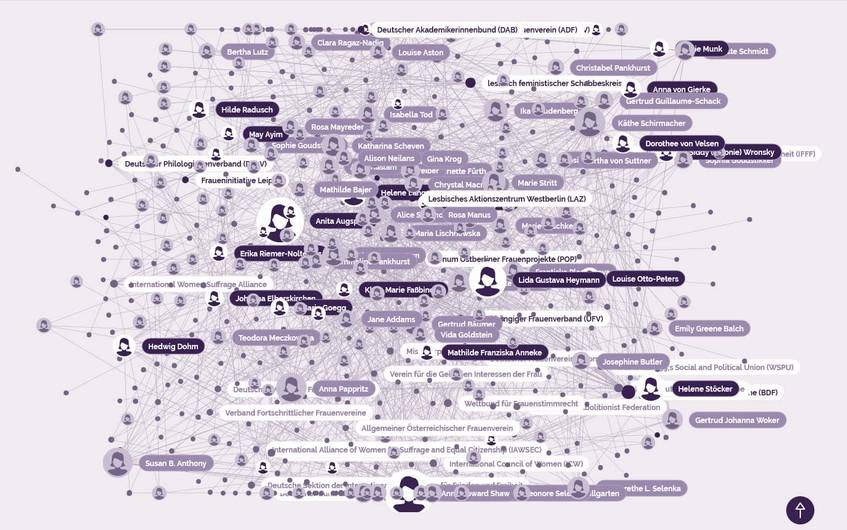 The protagonist network of the DDF (screenshot).

Digitising the history of the movement

One challenge on establishing the DDF is the rights clearance. There exists no general permission for cultural heritage institutions to present their holdings on the web. Usage rights must be obtained for each individual object.

It is particularly smaller institutions, such as memory institutions of social movements, which work with only a few members of staff, most of them in an honorary capacity. This is an obstacle for a deeper understanding of complex legal regulations. Moreover, movement archives possess materials like posters or flyers where the usage rights constitute a particular challenge due to unclear authors.

The experience gained from digitising for the DDF has been summarised in a brochure as Praxistipps zur Rechteklärung (Practical Tips on Usage Rights), which can be ordered free of charge or downloaded. 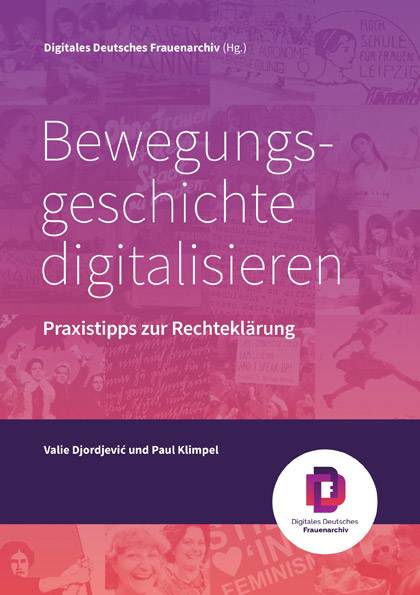 The archive documents presented on the DDF at the online launch in September 2018 were only the beginning: new material has been, and is still being, constantly added. To date, only a selection of the holdings has been digitised; moreover, the holdings are continually growing. Preserving the documents of feminist movements and processing them analogously as well as digitally is an ongoing task.