DDBspotlight: About a drinking song, a divided musical score and a European anthem

Around 1816, Ludwig van Beethoven received a commission from England: the Royal Symphonic Society ordered several new compositions from him. It took a few years for them to get results from Beethoven, but in 1824 the time had come, and he sold his 9th Symphony in D minor to the British. The symphony whose last movement was to become the European anthem. Sold to those who were going to turn their backs on Europe 200 years later.

Be embraced, you millions…

It actually all began with Friedrich Schiller. A relatively young Friedrich Schiller who, at 25 years of age, shortly after the unexpected success of his first work “Die Räuber” (“The Robbers”) (1782), was already experiencing a quarter-life crisis. Practically unemployed, in debt and sternly watched by an officer, to whose wife he had become too close, the young poet was not in a good position when he received a letter in 1784. The senders: a group of young people from Leipzig, who were passionate admirers of him and who wanted him to visit them. Since, as mentioned, things were not going well privately for Friedrich, he complied with their request and travelled to Leipzig in April 1785. This visit was to change his life: he found a patron, which abruptly solved his financial problems, he found distraction and perhaps the most important, he found friendship.

His delight at these developments caused Schiller to create his famous poem “An die Freude” (“Ode to Joy”). Conceived as a drinking song, the poem praises freedom, friendship and the brotherhood, respectively sisterhood of all mankind:

(“Be embraced, you millions!
This kiss is for the whole world!
Brothers – above the canopy of stars
must dwell a loving father.”) 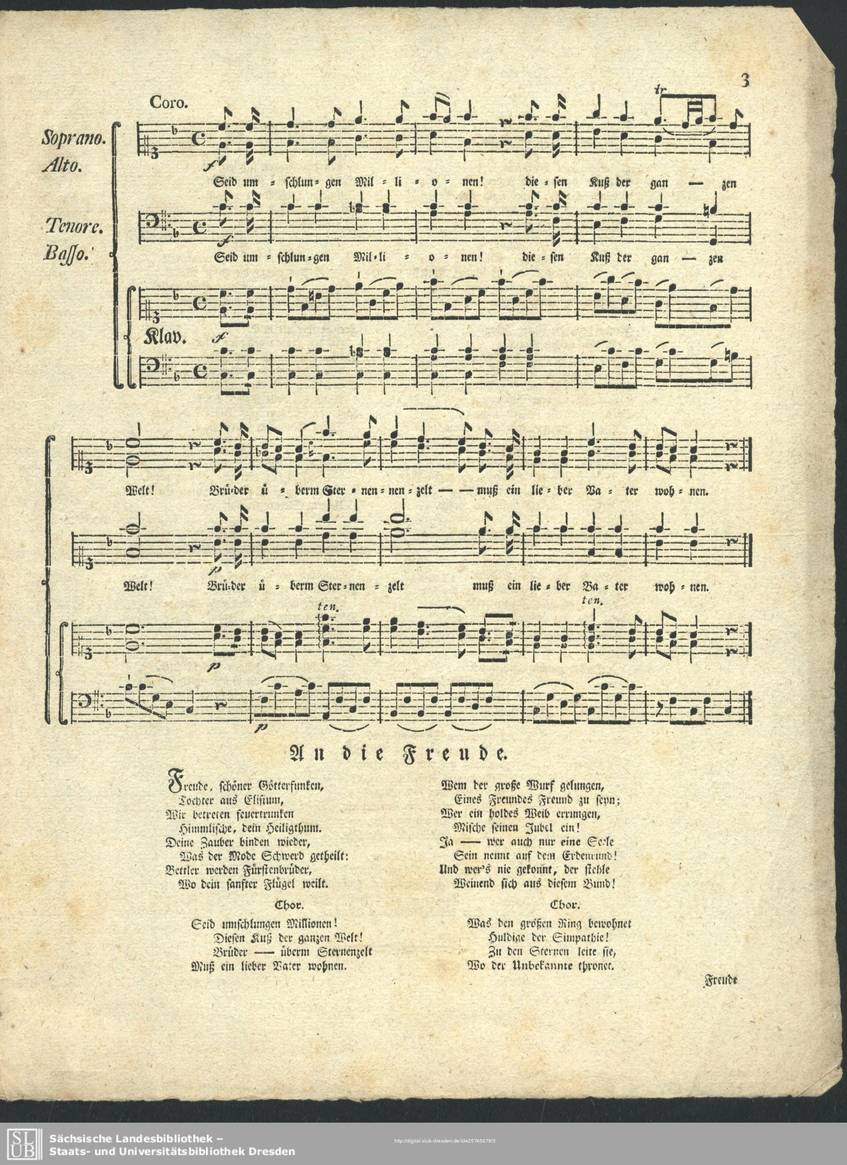 After its publication in 1786, the poem became a great success. Beethoven was also fascinated by the poem and in 1812 he wrote in his notebook: “Freude schöner Götterfunken… Ouvertüre ausarbeiten…” (“Joy, beautiful spark of divinity – work out the overture…”). By this time, however, Friedrich Schiller had been dead for seven years. Ultimately, it was to take another twelve years until the Symphony No: 9 in D minor, Op. 125 was premiered in Vienna on 7th May 1824. In the fourth movement of the symphony, the choral finale resounds with Schiller’s words:

(“Joy, beautiful spark of divinity,
Daughter from Elysium,
We enter, burning with fervour,
heavenly being, your sanctuary!
Your magic brings together
what custom has sternly divided.
All men shall become brothers,
wherever your gentle wings hover.”)

This kiss is for the whole world!

The premiere of the symphony was applauded frenetically – Beethoven, who was completely deaf at that time, had to be turned around by the contralto to face the public, to accept the audience’s cheers. 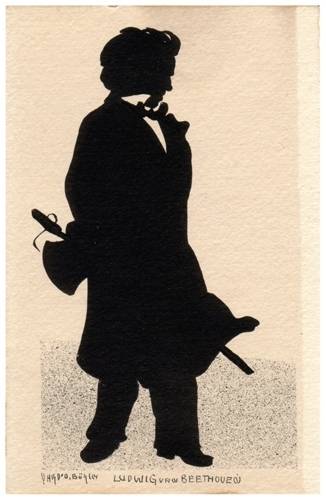 The 9th Symphony rapidly established itself as a success which, however, also led to its being instrumentalised and reinterpreted in the following decades and centuries, depending on the state of society. The supposedly clear concept “All men shall become brothers” was not clear for everyone, never mind comprehensible. 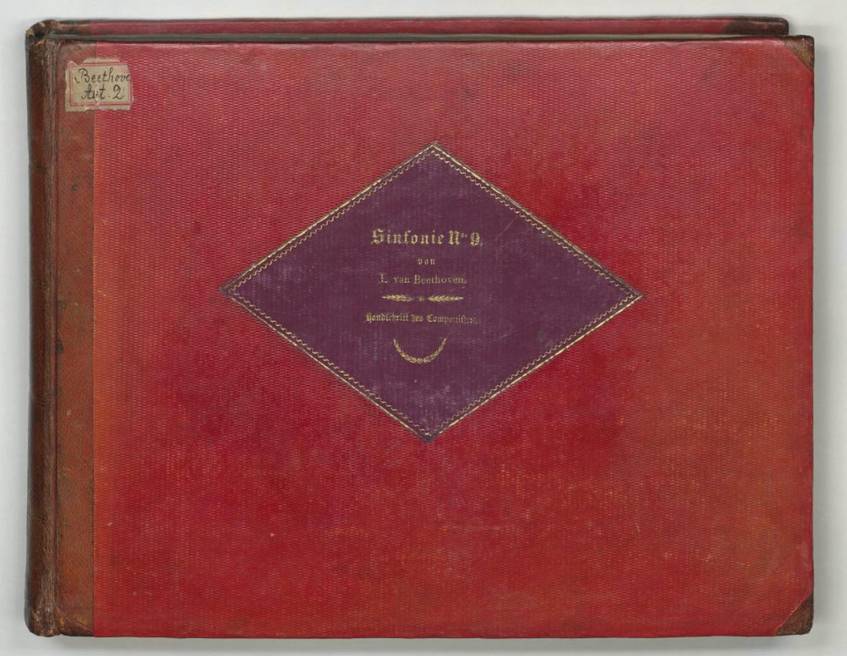 Here are just a few of the historical uses in quick succession:

Richard Wagner used the symphony against the backdrop of the 1848 revolution, when he was court conductor in Dresden, and had the choir sing “All men shall become brothers” on the eve of the May Uprising in Dresden. This was a political decision by Wagner: King Frederick Augustus II should be overthrown and a Saxon Republic established. In the end, the “first-class democrat” Wagner had to flee Saxony, together with his friend and opera house architect Gottfried Semper. Only 20 years later, after the Franco-Prussian War 1870/71, Wagner was less a democrat and more a nationalist and without further ado he declared the 9th Symphony to be a pure “German anthem”.

In the German Empire, the symphony was part of the standard repertoire for choirs. While it was just this empire which was waging war on half of Europe in 1916, the people-uniting elements of the text were no longer so popular and a strike took place in the Gewandhaus choir in Leipzig, led by nationalist-minded singers. But two years later, it was just this Gewandhaus which established the “Ode an die Freude” as an annual New Year’s Eve tradition. 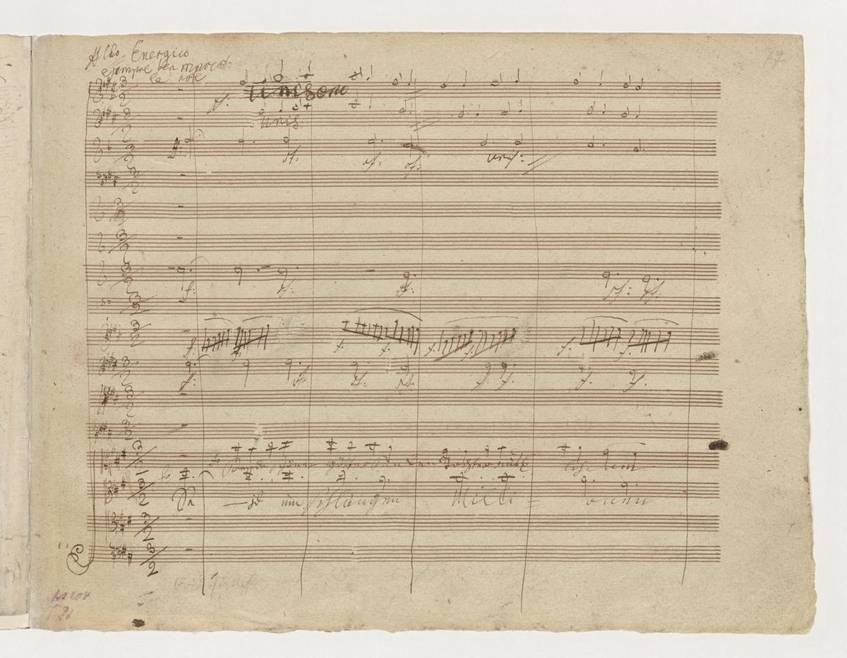 Then, during the Second World War, the National Socialists made the symphony into “heroic music of the Titans”, as Joseph Goebbels, the Minister of Propaganda, said at the celebrations for Adolf Hitler’s 53rd birthday in 1942. To protect the musical score, it was divided and deposited in different places in Germany. This led to the famous last movement of Beethoven’s 9th Symphony sharing the same fate as Germany after the war: one part was in West Berlin, the other in East Berlin, separated by the inner-German border. The irony of this circumstance was that the musical score was divided at the place where it says, “Seid umschlungen Millionen” (“Be embraced, you millions”).

The Berlin Wall was not yet built, the division was still in its beginnings, and so the last movement of the 9th Symphony was played at the Winter Olympic Games in Oslo in 1952 as a common national anthem for both German states. Both of which, by the way, denied Beethoven’s legacy to the other. In East Germany’s opinion, the allegedly imperialistic West Germany had no right to Beethoven’s commemoration; for West Germany, the “lieber Vater” (“loving father”) described by Schiller could only live over the stars and not under them, and definitely not under a red star.

The divided musical score was reunited much later than the country, namely in 1997. Today, the original musical score is in the Staatsbibliothek zu Berlin and is part of the UNESCO’s Memory of the World Programme. 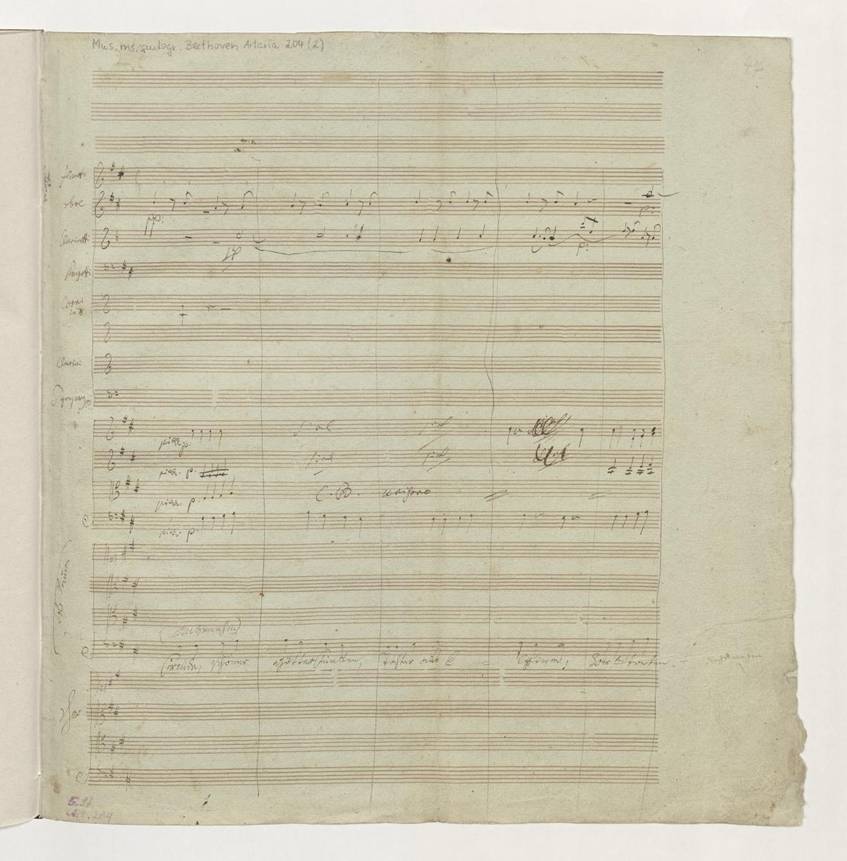 All men shall become brothers…

In 1972, the Council of Europe made Beethoven’s “Ode an die Freude” its anthem; in 1985, the European Heads of State and Government decided to make it the official anthem of the European Community: “It expresses the European values of freedom, peace and solidarity without words, only in the universal language of music” – a parliamentary “song without words” for a union of states with 24 official languages and more than 60 regional and minority languages.

From this last movement, however, an anthem still had to emerge which was somewhat shorter than 25 minutes and whose length was suitable for various state ceremonies. The “General Music Director of Europe”, Herbert von Karajan, was commissioned to write three different instrumental versions: for piano, wind ensemble and symphony orchestra.

But the eventful history of this anthem was hereby far from over: as a temporary anthem, as a political statement on the fall of the Berlin Wall and for Brexit, a call for perseverance during a worldwide pandemic - these famous 16 bars of Beethoven continued to communicate the values of Europe:

In December 1989, the conductor Leonard Bernstein had the 9th Symphony performed at the Gendarmenmarkt in East Berlin and, in doing so, replaced one word: he changed “Freude schöner Götterfunken” (“Joy, beautiful spark of divinity”) into “Freiheit schöner Götterfunken” (“Freedom, beautiful spark of divinity”) – a musical memorial to the fall of the Berlin Wall, and this was broadcast in twenty countries.

In 2010, Kosovo declared its independence from Serbia; at this point in time, it had neither a national flag, nor a national anthem. The European anthem was played as a provisional national anthem at the corresponding ceremonial act. The Kosovar Philharmonic had practised for this for weeks.

On 22nd March 2020, during wide-ranging measures against the coronavirus, musicians from all over Germany played Beethoven’s “Ode an die Freude” from their balconies and gardens as an action for solidarity and the joy of living – this can be seen and heard on Twitter at #musikerfuerdeutschland. 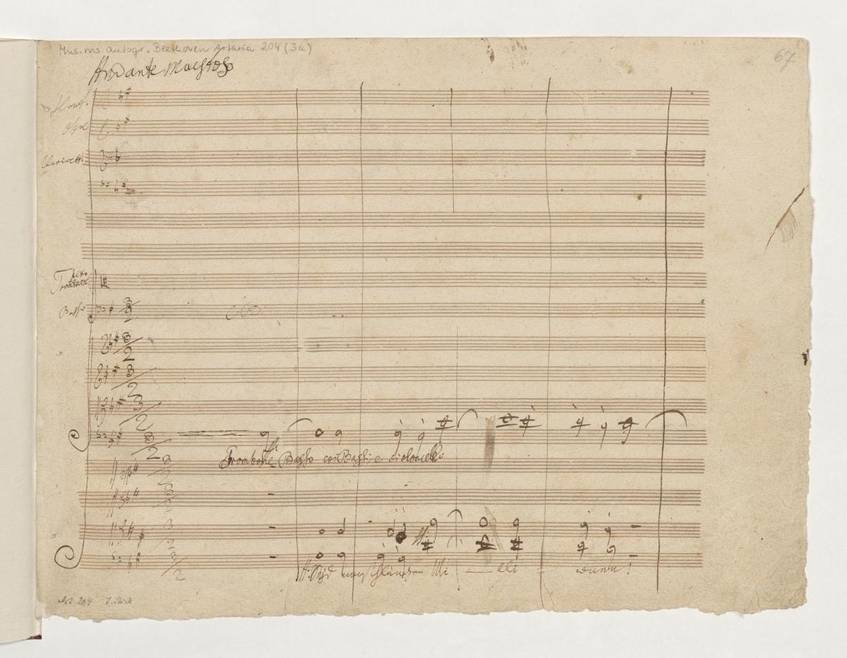 Beethoven’s 9th Symphony was premiered in England in May 1825 – in February 2017, Scottish parliamentarians sang the European anthem in the British House of Commons while the votes were being counted for Brexit. They were called to order: “Cut, cut, order! Order!!!”. The Speaker of the House of Commons declared that he personally didn’t have anything against singing, but that really did go too far.

January 2020: after 47 years the British left the EU. The parliamentarians who had just set the seal on the Brexit divorce bill were met outside the European Parliament in Brussels by a bagpipe player. He played the European anthem for them. 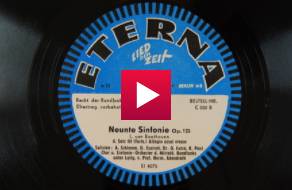