On 1st May 1886 in Haymarket in Chicago: American workers went on strike for the introduction of the eight-hour day. The strike had a bloody end, but in the following years it became the basis for the 1st May as Labour Day (more information here). The historical roots of this fascinating and conflictual public holiday are not, however, the theme of this Spotlight, but that which daily surrounded the workers at the end of the 19th century: industrial architecture. We are devoting ourselves more specifically to one individual aspect of this architecture: clay brick. 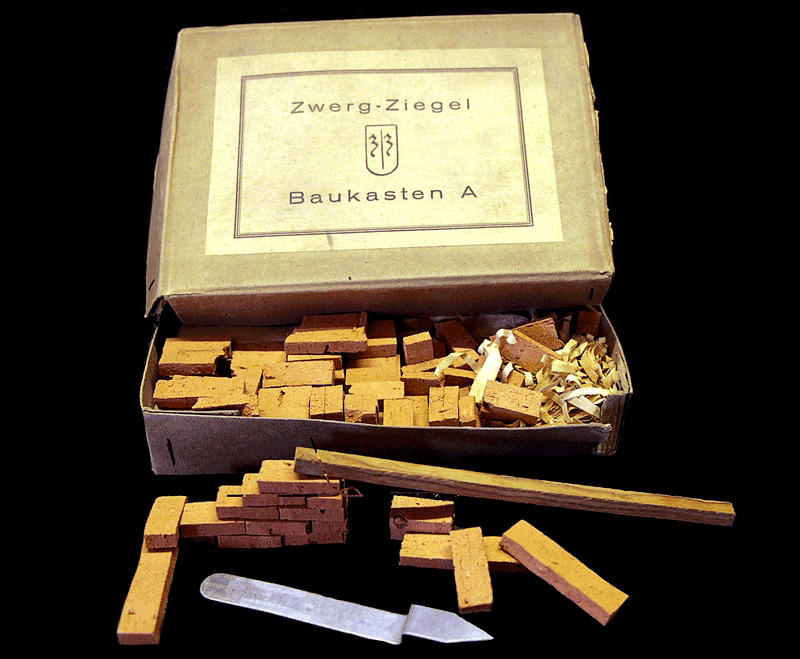 When you hear the term “adobe” today, you think of a PDF or Photoshop first of all. In 1886, people thought of brickwork in the first place. Since, particularly in the USA, unfired mud bricks were known under the Spanish term “adobe”. The software company, however, is not named after a brick, but takes its name from the stream “Adobe Creek”, which ran behind the house of the company’s founder, John Warnock. In addition to adobe, there is a wide variety of different bricks, which is the generic term, which have their own names depending on their method of manufacture. What they have in common is their material (mud or clay), their method of manufacture (they are shaped and dried) and their basic function (this is a matter of artificial stones).

In order to make them weather-resistant, most of the bricks are fired or baked; the German term for brick ("Backstein" literally “baked stone”) therefore bears its method of manufacture in its name. Adobe is merely dried in the open air and becomes soft in the rain. It is, therefore, primarily to be found in dry regions such as, for example, in the traditional construction style of the indigenous peoples of the Americas. The Pyramid of the Sun in Teotihuacan in today’s Mexico is considered to be one of the greatest examples of adobe architecture in the world. But it is fired bricks which are important for European industrial architecture and, above all, especially clinker bricks, which can be fired at such high temperatures so that the pores close and the stone hardly absorbs any water. 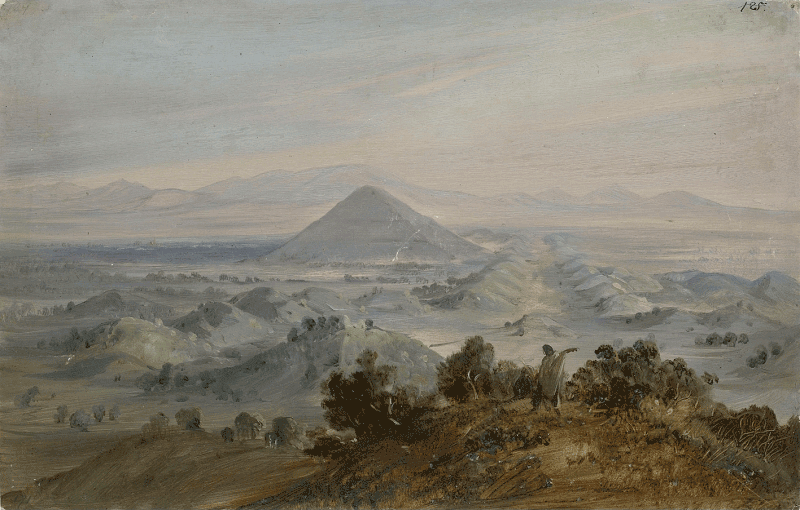 Together with wood, untreated stones and plant fibres, mud bricks are the oldest building materials of mankind. Archaeological finds from Jericho can be dated back to 7,500 BC, that is, to the New Stone Age (Neolithic period). Early examples of brick building can be found in the Mesopotamian Advanced Civilisation. One dazzling example is the Ishtar Gate, which the Babylonian King Nebuchadnezzar II had built around 600 BC. The Gate is not only remarkable due to its size, but it also represents a piece of outstanding craftsmanship with its glazed bricks. From the Bronze Age Indus Valley Civilisation up to Chinese brick buildings from 1,000 BC – brick architecture can be found all over the world. 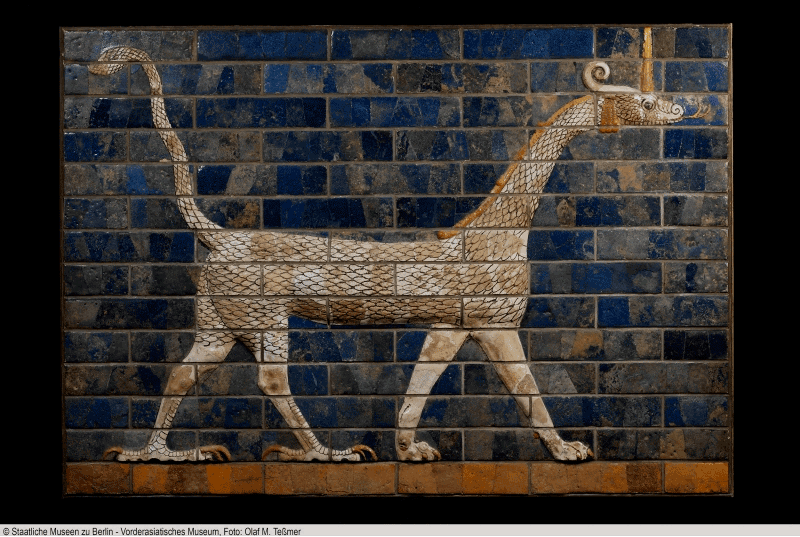 From the 1st century BC onwards, brick building experienced a heyday in the Roman Empire for about three hundred years. Brickyards spread out throughout the whole of the Roman Empire, so that brick remains are still found in archaeological excavations up to the present day. The Romans dried their bricks on the ground before firing them; as a result, traces of human and animal footprints are frequently immortalised in the building material. 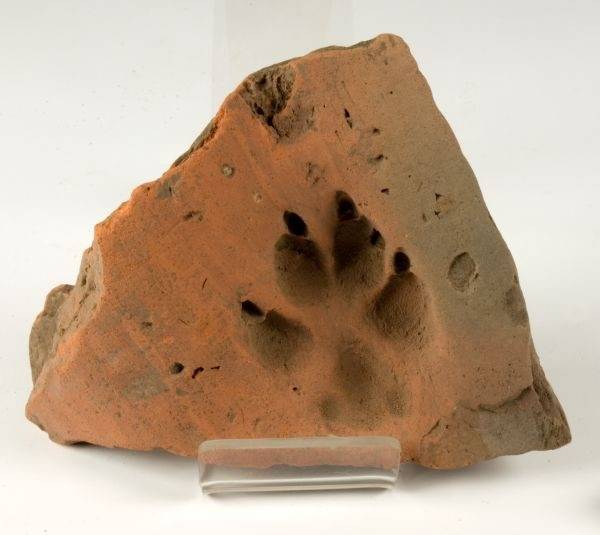 The ancient Romans laid their bricks on the ground to dry. The result: prints from paws, hooves and shoes. Research has shown that traces of dogs are to be found most frequently: “Hollow brick, Roman” (approx. 50-275 AD), Römermuseum Schwarzenacker (Schwarzenacker Roman Museum) (CC BY-SA 4.0 International)

In Central and Northern Europe, where it is no longer possible to imagine architecture without brick buildings today, bricks disappeared with the end of the Roman Empire at first. It was not until the High Middle Ages that monks re-introduced this architectural style. Brick Gothic, whose imposing buildings exhibited red bricks left bare or even bricks glazed in yellow, green or back, followed on from this. These magnificent buildings spread out, above all, in the Baltic area and in the Netherlands, respectively along the trade routes of the Hansa cities, but corresponding buildings can also be found in Southern Germany and as far as Galicia.

It was particularly in the Baltic and North Sea areas that brick was used as an alternative to natural stone, which was very scarce in the region. On the other hand, clay, which was necessary for the manufacture of bricks, was available in plenty. Trade also played an important role: the advantage of bricks is that they are lighter than natural stone and therefore considerably easier to transport. Cities with natural stone deposits could, therefore, easily import this building material. Christian and secular representative buildings, such as St. Mary’s Church in Lübeck (with the highest brick vault in the world) and the Schlieff House in Gdansk are classics of Brick Gothic. 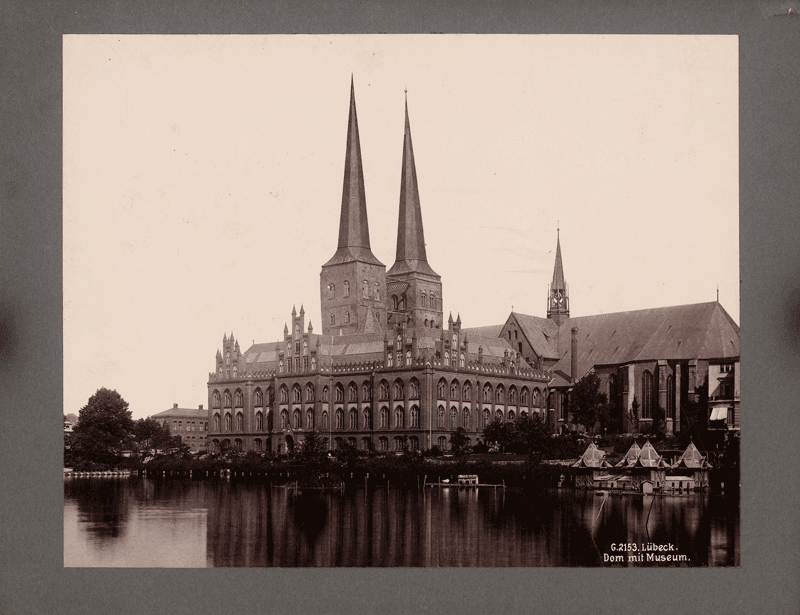 The end of the Middle Ages did not mean in any way the end of brick buildings. They continued in the Brick Renaissance, for example in the bourgeois gabled houses of the Hansa cities – just think of Amsterdam. But working with brick increased, also beyond the known trade routes. Brick increasingly replaced the half-timbered houses filled with clay and buildings of natural stone. But the typical red brick facade disappeared partly, since the brickwork was often plastered or the timber framework filled with brick.

The Industrial Revolution in the 19th century brought a new dimension of brick architecture. Far beyond the traditional spreading areas, factory buildings and railway stations were constructed of red brick left bare and clinker bricks. Since, for the large industrial complexes, power stations, water towers, blast furnaces and bridges which now shaped entire city districts and territories, building material was needed that was easy to manufacture, resilient and easily transportable. Brick met these requirements and accordingly became the architectural foundation of industrialisation. 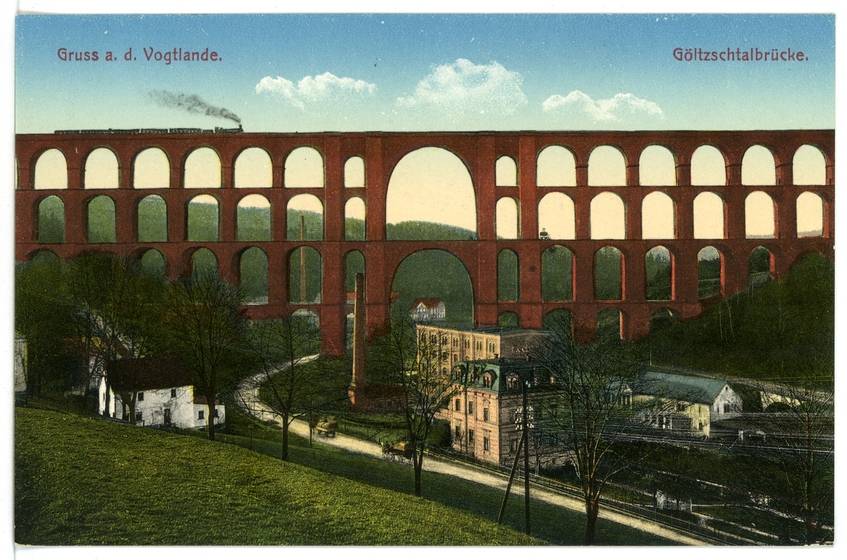 Buildings of new proportions were constructed of brick such as, for example, the Göltzsch Viaduct (in German: Göltzschtalbrücke) in the Vogtland in Saxony, which was completed in 1851 and, with its just under 80 metres in height and almost 600 metres in length, is still the largest brick-built bridge in the world. Here as a postcard motif: “Göltzschtal. Göltzschtalbrücke” (1913), SLUB Dresden / Deutsche Fotothek / Wikimedia Commons (Public Domain Mark 1.0)

The production of bricks also changed with the increased demand for building materials. In particular, the shaping, cutting and firing of the bricks was industrialised, that is, mechanised and accelerated. Traditionally, the clay mass was frozen over the winter, then cleaned and pressed into a brick mould per hand before it was dried in the open air and finally fired for several days. Bricks were able to be continuously fired in the industrial ring kilns, whereas traditional shaft kilns could only be stocked five times a year. 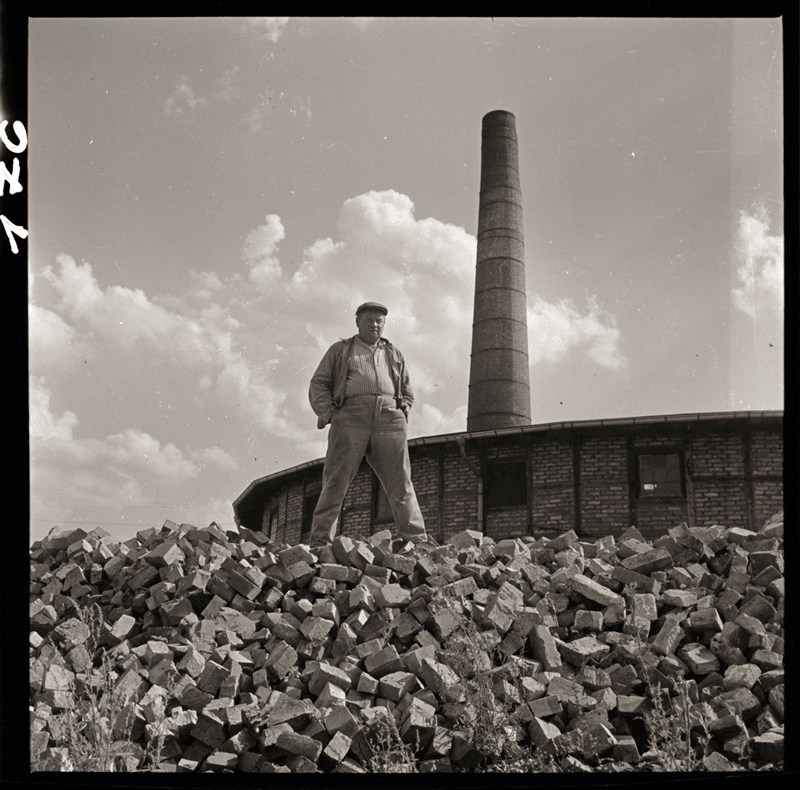 With the industrial production, however, artisan traditions were also lost such as, for example, the so-called “Feierabendziegel” (end-of-day bricks), After the work had been done, that is, at the end of the working day, special bricks were decorated with dates or with ornaments or symbols as lucky charms, sometimes just with a handprint.

Firing bricks was anything but simple: depending on the mixture of clay, respectively mud, storage, drying and the heat of the kiln, more than a third was often unusable, fragmented or fired at too low a temperature in the end. So it was not surprising that the first and last bricks were often decorated with suns and moons to invoke success. 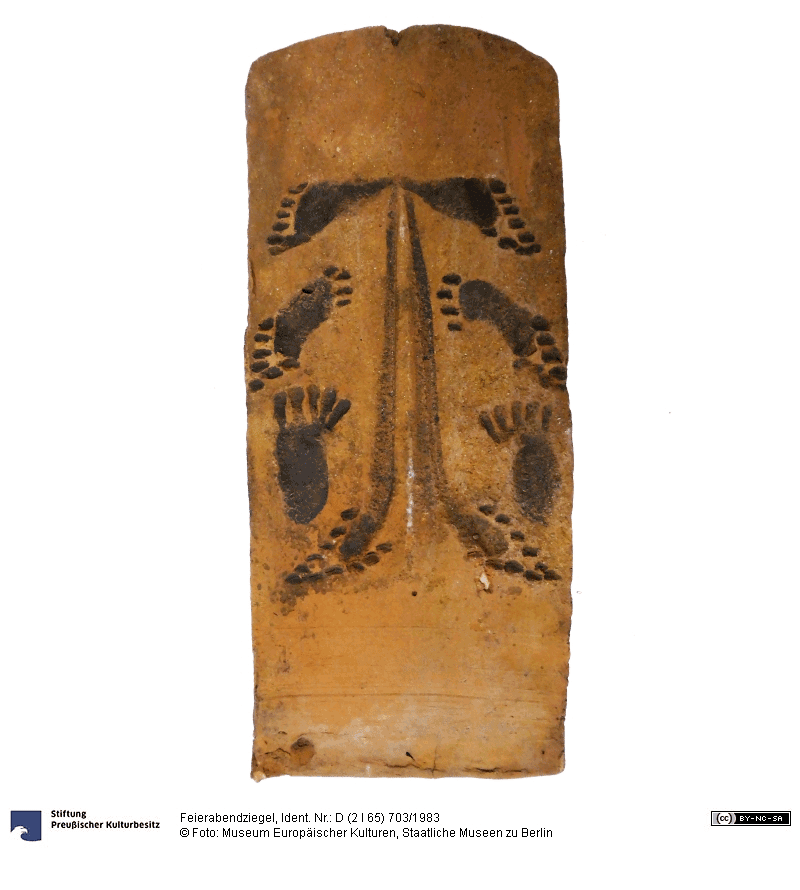 Living space also had to be created for the factory workers in the rapidly growing cities. Tenements were constructed of brick; some companies built workers’ quarters near their production sites; cities grew up here within cities, whose centre was no longer the church and its market place, but the factory building.

The new industrial architecture was not only characterised by its proportions, but also by its claim to representation. These “cathedrals of labour” took up the construction features of religious architecture: archways, chimneys and towers in neo-Gothic style were reminiscent of churches. Both a claim to power by industrialists and a slowly emerging social upheaval were connected with this. 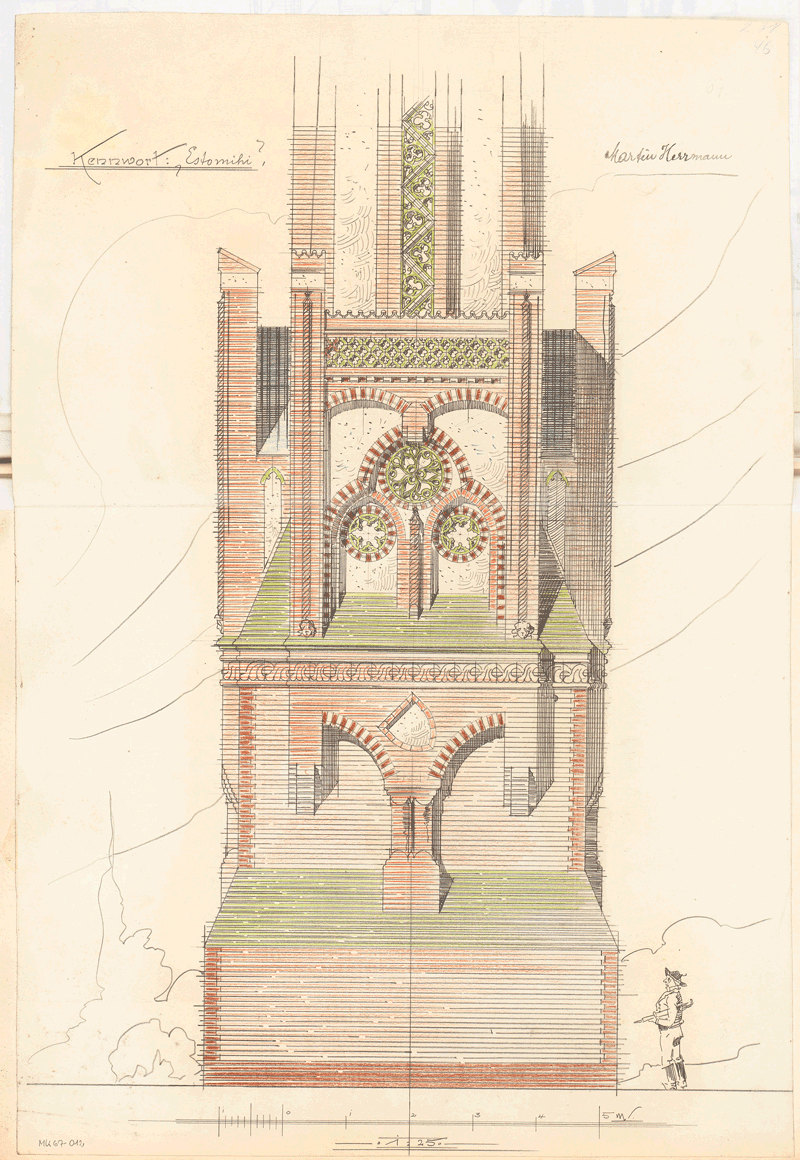 In keeping with the upheaval in society, a new architectural style emerged at the beginning of the 20th century: functionalism, respectively the New Objectivity. The buildings were characterised by their unpretentious shaping without many ornaments, whose design was mainly functional. Industrial architecture became a field of experimentation for new construction styles, forms of expression and materials. One example of a pioneer of this objective architecture was Peter Behrens, who designed everything for the Allgemeine Elektricitäts-Gesellschaft (AEG Aktiengesellschaft) (German Electricity Company) in Berlin, from factory buildings and workers’ housing estates via letterheads and advertising posters up to tea kettles und ventilators. 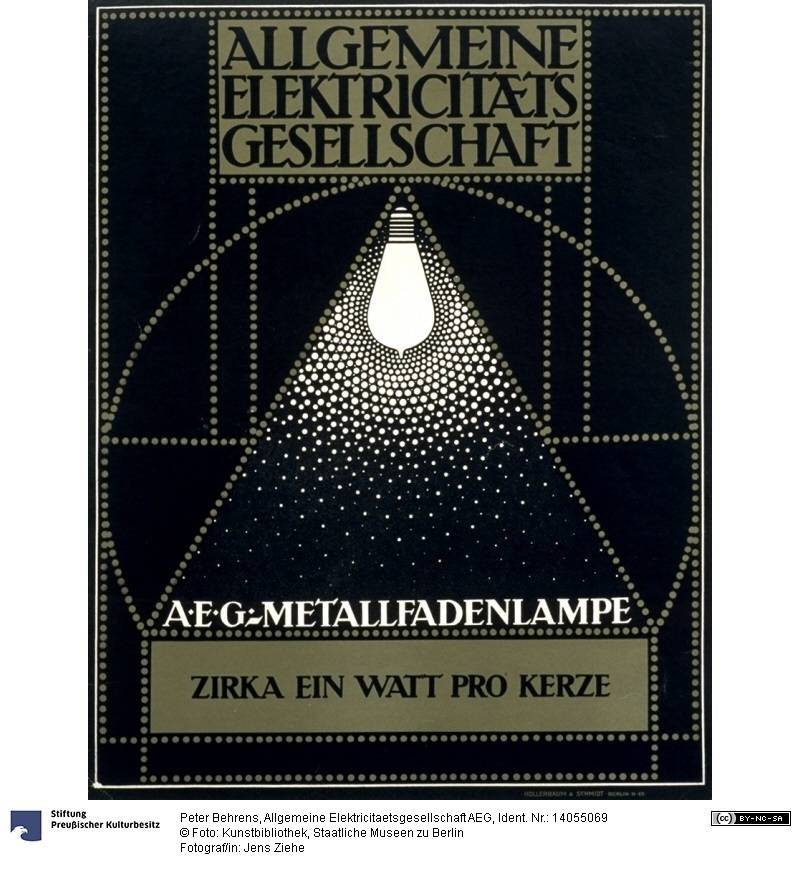 In the late 1920s, brick architecture once again took on very special forms. Brick Expressionism, which could be admired, above all, in Germany and the Netherlands, used bricks, tiles and clinker bricks to create unconventional expressive forms and ornaments. Building facades were decorated with patterns of different coloured bricks and clinker bricks, from red and dark brown via violet up to black. Hard-fired defective clinker bricks were also used.

In addition, Brick Expressionism made use of angular stone shapes and created relief-like wall decorations. In this way, it functioned as a counterpart to the restrained New Objectivity. The sharp-edged dynamic buildings of Fritz Höger were representative of an architecture which skilfully drew attention to brick. As well as industrial and commercial buildings, Höger designed churches, high-rise buildings and town halls, schools and even a crematorium. 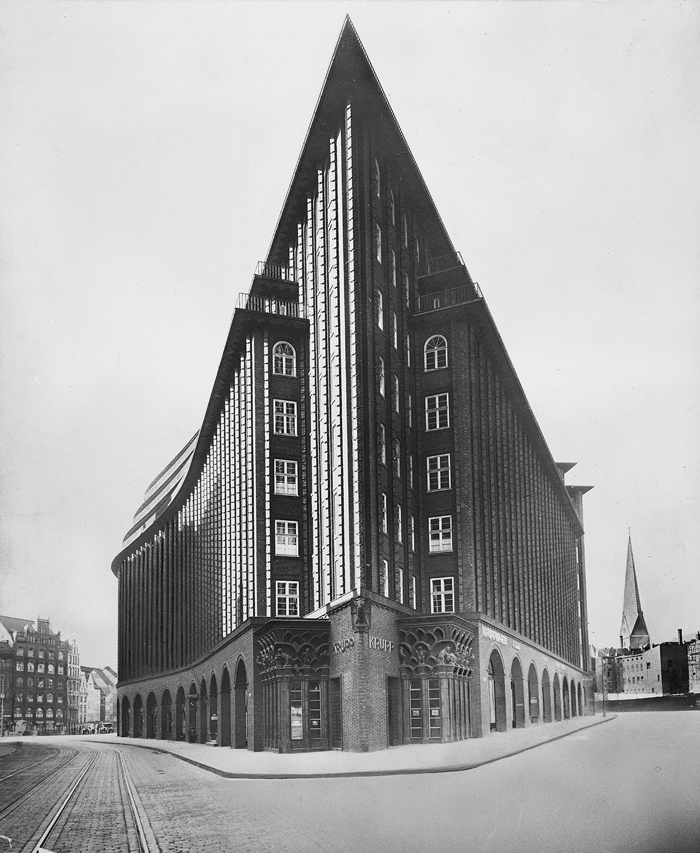 These brick-accented buildings emerged at a time in which construction styles had greatly changed once again. Reinforced concrete and glass became the dominant building materials in the following decades, first in industrial architecture and, at the latest after the Second World War, in residential construction. The large housing estates, which were built from scratch in the 1960s and 70s, were almost synonymous with prefabricated concrete panels. Set pieces, which made it possible to build quickly, homogeneously and at relatively low cost.

Today, brick is used, above all, for decoration, as so-called faced brickwork. Many factory buildings from the turn of the century are now listed buildings. In the meantime, they are rarely used in the sense of their original function. Brick-dominated industrial architecture has nevertheless made a comeback: whether as private housing such as in the former Glanzfilm AG in Berlin-Köpenick, as a place for art and culture like in the Kindl Brauerei (brewery) in Berlin or as a mix of research areas, commercial enterprises and media companies as on the former AEG site in Berlin Wedding (today the Humboldthain Technology Park). Bricks from old buildings have been re-used. Whether as building material or ornament, brick has determined the structure and appearance of housing space for more than 9, 000 years and is therefore not only the foundation of industrial architecture, but also of human settlements all over the world.