From the Archivportal: “Focus on – Progressive Education”

In the Archivportal-D’s section “Im Blickpunkt” (“Focus on”), we present special highlights from archives represented in the Archivportal-D. These selected archival documents give an insight into the holdings and offer research suggestions for a possible search in the Archivportal-D or in the theme portal “Weimarer Republik” (“Weimar Republic”). This month, we are pleased to be able to present a scientific contribution by Dr. Sebastian Engelmann, junior professor at the Pädagogische Hochschule Karlsruhe (Karlsruhe University of Education) with sources from the Landesarchiv Baden-Württemberg (State Archives of Baden-Wuerttemberg).

Educational concepts from the end of the 19th century up to the beginning of the Second World War are designated as historic progressive education; this rebelled against education low in experience, cramming or grind schools and authoritarian conditions and, on the basis of a cultural-critical perspective, imagined a different kind of education. From a systematic perspective, progressive education means educational considerations on, for example, the democratisation of the relationship between teachers and pupils with a partnership-based approach, or even promoting self-activity among children and young people.

Admittedly, progressive education, which spoke often enough pathetically about democratisation, also had its dark sides, with its strong emphasis on community spirit and often nationalistic and patriotic tendencies. The cases of abuse at the Odenwald School in Heppenheim in Hessen (1966-1989) – the former progressive educational lighthouse project – and also the focusing on the training of future elites in many progressive educational establishments show that these institutions, which display, in particular, such a positive effect in their outward appearance, in no way realised the utopias they presented to the outside world in their organisational reality. There were, and are, often worlds between the programmatic writings and the everyday practice in the establishments.

One progressive educational institution which still exists today was founded in 1919 by Kurt Hahn, together with his close friend Prince Maximilian of Baden (1870-1929), the last chancellor of the German Empire: the boarding school Schloss Salem (Salem Castle School). Entirely in line with the political orientation of Salem, politicians such as the former vice-chancellor of the German Empire, Friedrich von Payer (1847-1931), were invited to Salem to play a part in the training of a leadership elite for the improvement of social circumstances. Payer had a place in the Weimarer Reichsversammlung (Weimar National Assembly) and was a member of the Deutsche Demokratische Partei (DDP – German Democratic Party). 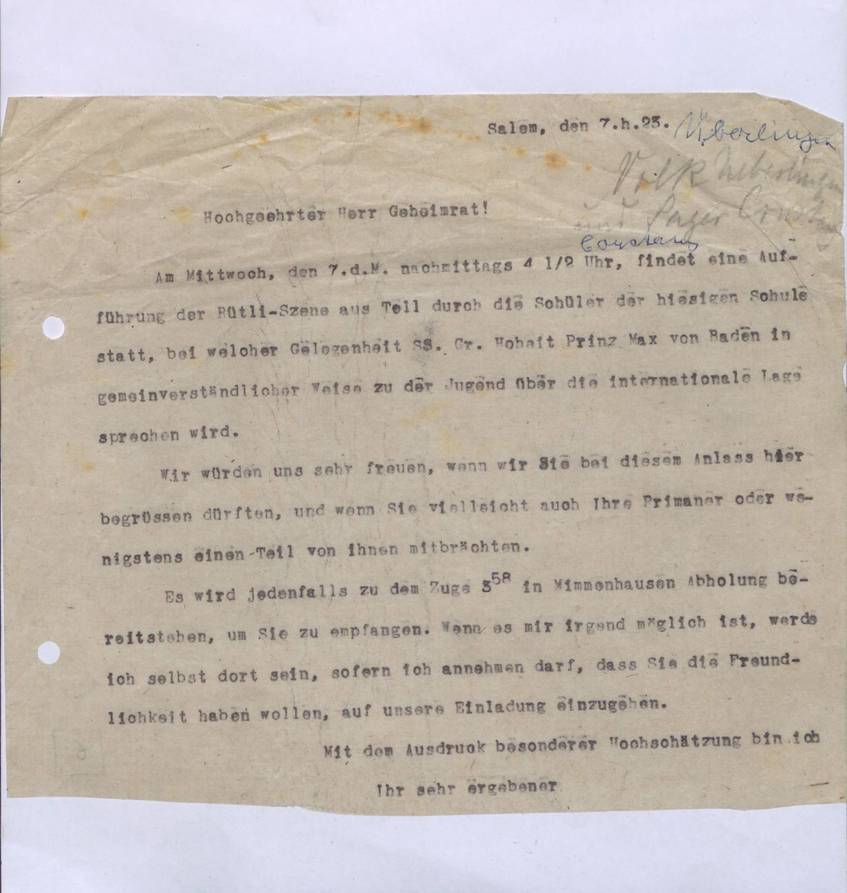 At the time of the Weimar Republic, Salem offered a mixture that seems peculiar today: German national conservatism and the emphasis on aristocratic virtues with simultaneous democratic orientation, which was also reflected in the school’s principles. These were praised, for example, by educators like Theodor Bäuerle (1882-1956), a member of the DDP who advocated national education in the Weimar Republic. And the neo-Kantian philosopher Leonard Nelson (1882-1927), who ran the Landerziehungsheim Walkemühle (country school education centre Walkemühle), together with Minna Specht (1879-1961), and with whom Kurt Hahn first reflected on education theory, also showed interest in the school. 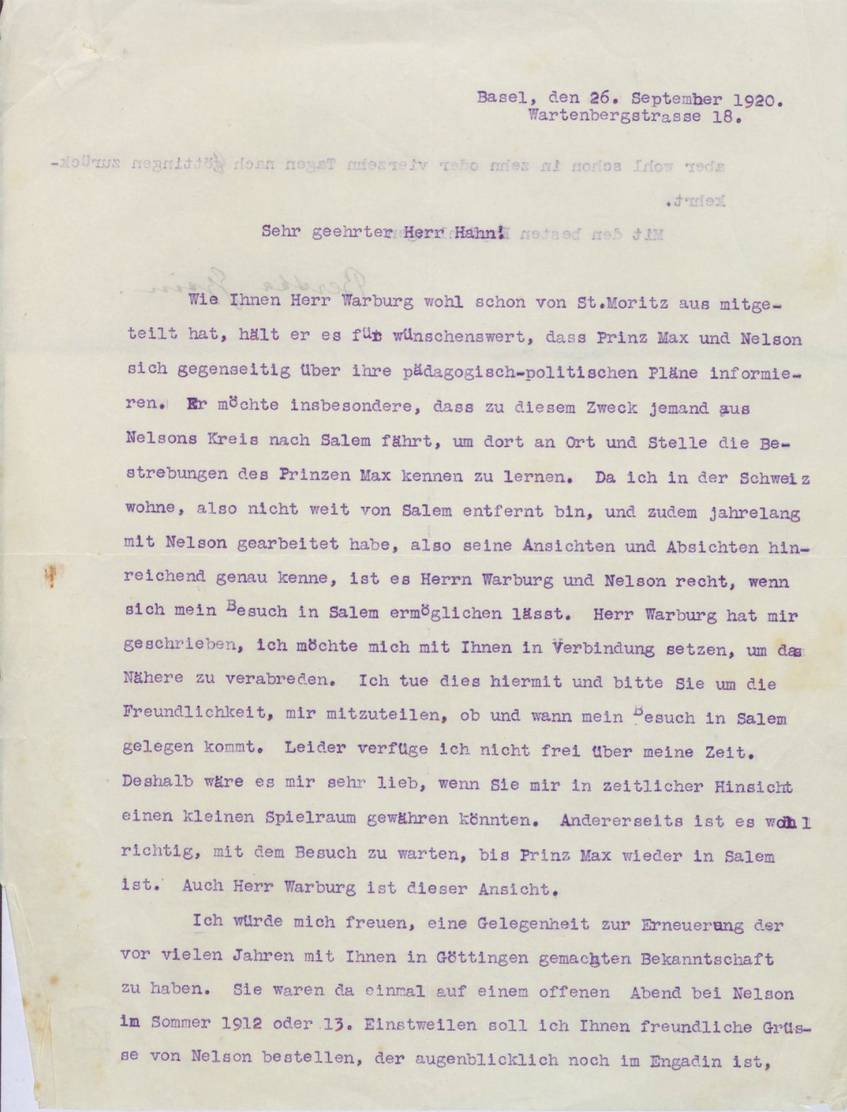 Carbon copy of a letter from Bertha Sindler-Gysin to Kurt Hahn; request for an appointment to visit from [Max?] Warburg and Leonard Nelson in Salem (20th September 1920 – 19th November 1920), Landesarchiv Baden-Württemberg, Abt. Generallandesarchiv Karlsruhe, FA N 6339, 1

These brief insights already illustrate that the progressive educationally-inspired educational and training institution founded by Kurt Hahn was closely connected to the political development and the political personnel of the Weimar Republic. For Kurt Hahn, education was the beginning of politics. Education – and in particular the training of elites – became apparent as transmission belts of political attitudes, a perspective that needed to be worked out again and again. Educational practice cannot be neutral, but is to be critically reflected, in particular in its historical genesis, in order to develop further Kurt Hahn’s mainly positively reviewed work with regard to his contribution to political-historical education.

Our sincere thanks to Dr. Sebastian Engelmann, junior professor at the Pädagogische Hochschule Karlsruhe, for making this available.

You can find all objects on Kurt Hahn in the Deutsche Digitale Bibliothek (German Digital Library) here.

Links to the sources in the theme portal

Carbon copy of a letter from Bertha Sindler-Gysin to Kurt Hahn; request for an appointment to visit from [Max?] Warburg and Leonard Nelson in Salem

If you are interested in further sources on progressive education in Baden or in the German Empire, select “Reformpädagogik” (“Progressive Education”) from the A–Z Index in the theme portal and combine this thematic keyword with the geographical reference “Republik Baden”(“Republic of Baden”) or “Deutsches Reich” (“German Empire”).

You can find further sources on the keywords “progressive education”, “education” and “youth movement” in the object gallery on the homepage of the theme portal.