From the Archivportal: "Focus on – A Priest wants to go to Heaven in his Lifetime"

By the Archivportal-D Editorial Department

During his time as priestof the small country parish of Thurndorf in the Upper Palatine district of Neustadt a.d. Waldnaab, Johann Barnickel (1870-1952) had an unusual hobby: he was interested in aeronautical science.

This passion is documented by about 0.7 linear metres of file material and books, including, among other things, works on aeronautics from the years 1853 to1926. Barnickel maintained a lively correspondence with numerous scientists. He put theoretical knowledge into practice with model experiments on rotor flight as well as the flight of insects and birds and wrote many essays on aeronautics. 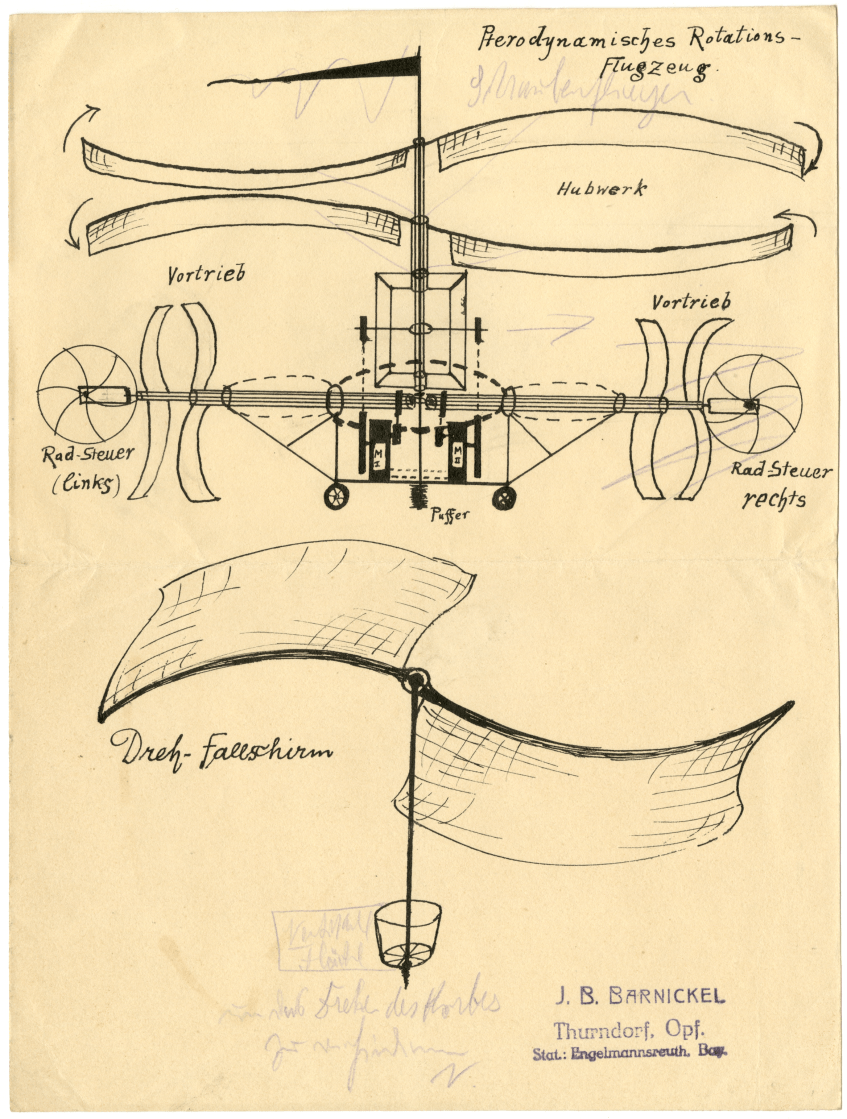 Barnickel designed the sketches of a pterodynamic rotary aircraft as well as a revolving parachute based on the model of the natural flight of birds: the curved, elastic wings of birds execute a so-called “pterodynamic effect”, i.e. a circulating stream of air arises which induces a lift beneath the wing and a thrust or propulsion at the wingtip.

In 1914 he sent this design, together with the manuscript "Flugtafel oder Berechnung der Kilogrammziffern von 50 Vögeln" (“Flight table or the calculation of the kilogramme numbers of 50 birds”) to Gustav Lilienthal (1849-1933), the brother of the aviation pioneer Otto Lilienthal (1848-1896), for evaluation. Gustav’s extensive answer culminated in the realisation that Barnickel would need "weit wirksamere Motore als wir [sie] bis jetzt zur Verfügung haben"(“much more effective motors than we presently have available”) for the “Hubschrauben” (“rotors”) which he wanted to use for the wings.

From the middle of the 19th century onwards, new “rotary models” (“helicopters”) were developed time and time again. The first fully operational helicopter was developed by Professor Henrich Focke (Bremen) and was able to take off on its maiden flight in 1936.

If you would like to learn more about Johannes Barnickel’s enthusiasm for aeronautics, you can browse through the Archivportal-D in the holdings Barnickel, Johannes (1870-1952) of the Archive of the Archdiocese of Bamberg.

More treasures from the Archive of the Archdiocese of Bamberg can be found in the German Digital Library.