From the archive portal: „Focus on – the Reich Central Office for Homeland Service“

In the rubric “Im Blickpunkt” (“Focus on”), we present special highlights from archives that are represented in the Archiveportal-D. These selected archival documents provide an insight into the holdings and offer research suggestions for a possible search in the Archivportal-D or in the theme portal “Weimarer Republik” (“Weimar Republic”). This month, we are pleased to be able to present a scientific contribution by Pierre Schmuck from the Albrecht-Ludwigs-University Freiburg with sources from the Landesarchiv Baden-Württemberg (State Archives of Baden-Württemberg) as well as from the Bundesarchiv (Federal Archives). In the information on further research options below, we refer to our object gallery on the homepage of the theme portal, in which we present further sources on this group of themes.

With the Reichszentrale für Heimatdienst (Reich Agency for Homeland Service), for the first time there existed a German government authority between 1919 and 1933, which was responsible for political and civic information and education. It emerged from the Zentrale für Heimatdienst (Headquarters for Homeland Service), which was already founded in March 1918 during the First World War. In the Weimar Republic, according to a corresponding resolution of the Reichstag, its work assignment was: sachliche Aufklärung über außenpolitische, wirtschaftspolitische, soziale und kulturelle Fragen, und zwar nicht im Geiste einzelner Parteien, sondern vom Standpunkt des Staatsganzen (factual information on foreign policy, economic policy, social and cultural issues, but not in the spirit of individual parties, but from the point of view of the state as a whole). In this regard, the Reichszentrale für Heimatdienst in some ways may be interpreted as a forerunner of today's Bundeszentrale für politische Bildung (Federal Agency for Civic Education).

The Reich Homeland Service was headed by the Superior Councillor (later Undersecretary) Dr. Richard Strahl (1884–1957). In addition to the Headquarters in Berlin, the structure of the authorities temporarily included more than 20 regional departments, which were set up across the entire territory of the German Reich. These branch offices played an important role in offering official political education and training activities: They were responsible for the distribution of printed material and organised events for the Reich Homeland Service on site. Furthermore, they functioned as contact and coordination offices to local administrative authorities as well as for those clubs, associations and institutions of contemporary national education that had given themselves a similar political education task.

The Reichszentrale für Heimatdienst committed itself to political objectivity and neutrality. Its activity should be free from party political tendencies and should focus solely on the wellbeing of the state as a whole. In order to live up to its own claim to have a balancing effect in contemporary battles of opinion and thus to establish a basic political consensus, the Reich Homeland Service, by its own account, endeavoured to publish only material that was based on scientific knowledge and facts. On this basis, each and every individual should be able to form their own judgment on contemporary political challenges.

In practice, the Reichszentrale used different methods to convey its contents. The authority published the regular writings “Der Heimatdienst” “(The Homeland Service)” and the “Richtlinien” “(Directives)”, in which they prepared political topics for a broad audience. Another important field of activity was lecturing. The Reich Homeland Service organised information, training and educational events in various formats. In addition to a series of lectures lasting several months, this also included weekend conferences – so-called civic training days – and numerous individual lecture events. The latter quite often took place in smaller towns and rural regions of the Republic; in this respect, the potential range of political awareness-raising and educational activities was quite high. The topics ranged from economic and socio-political issues to constitutional questions and focus areas of German foreign policy. 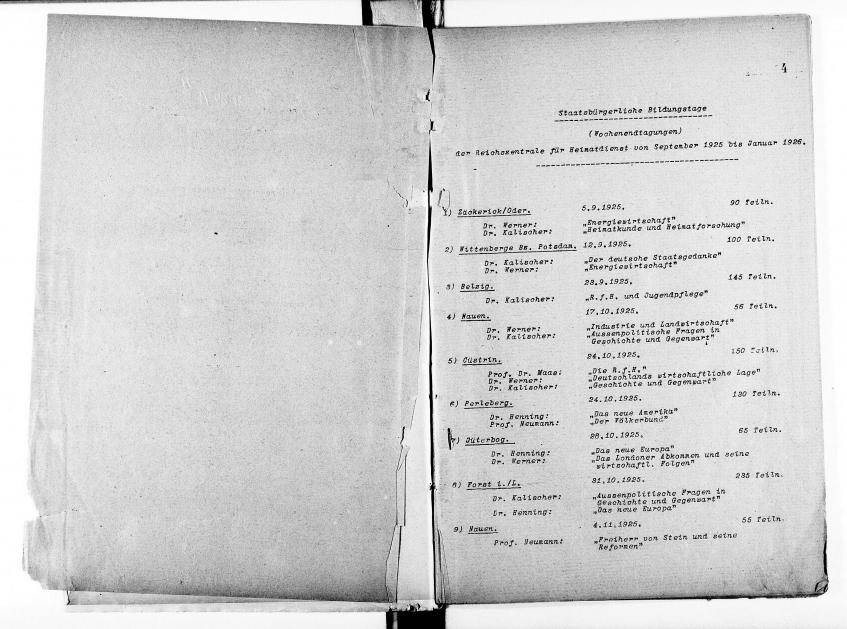 Moreover, the Reich Homeland Service was responsible for distributing official announcements in the form of posters. This field of activity included not only calls to the population to take part in elections, but also propaganda attempts to influence the national referendums in Schleswig-Holstein (February/March 1920), East and West Prussia (July 1920) and Upper Silesia (March 1921) as well the journalistic support of the “Ruhrkampf” (Ruhr Campaign) during the French occupation in 1923. 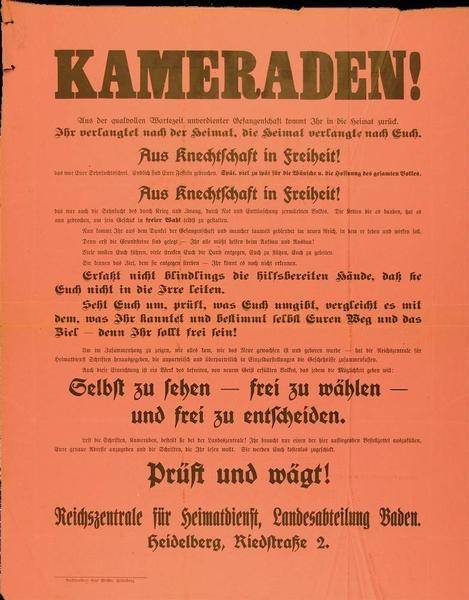 The claim of factual and objective public enlightenment on the one hand and the sometimes propagandistic methods of the Reich Homeland Service on the other hand appear as two contradicting aspects of this authority. Not least because of this, the Reichszentrale für Heimatdienst was also contemporarily criticized – with different arguments depending on the political point of view: On the communist and German national side, the accusation was articulated that the authority was engaged in government propaganda. Republican-minded politicians, on the other hand, criticized the fact that the Reich Homeland Service was not fighting efficiently enough for the Weimar Democracy and Republic. Despite such criticism and demands for the authority to be abolished, the Reichszentrale für Heimatdienst remained in existence until the end of the Weimar Republic. It was only dissolved on March 15th, 1933 when the National Socialists came to power. The foundation of the Reich Ministry for Public Enlightenment and Propaganda rendered the agency redundant in the eyes of the new regime.

This text is a scientific contribution to the series “Focus on”. We would like to thank Mr. Pierre Schmuck from the Albert-Ludwigs-University Freiburg for providing the information.

In the object gallery on the homepage of the theme portal you will find further sources on the keywords Reichszentrale für Heimatdienst and Propaganda.