Coding da Vinci Schleswig-Holstein 2021: 19 Project Ideas at the Kick-off in the North

On 24th and 25th April, the time had come: The kick-off of Coding da Vinci Schleswig-Holstein 2021 took place. The poetry slammers Selina Seemann and Björn Högsdal led through the programme, which was realised completely online. The presenters let the participants and viewers of the livestream, broadcasted by the Offener Kanal (Open Channel) Schleswig-Holstein, share in their favourite Low German (Plattdeutsch) proverbs and led about 90 participants through the weekend with a good dose of humour.

Presentation of the data with a beach feeling

After the participants had got to know one another, the 34 data-providing institutions presented the 52 diverse data sets briefly and concisely in the 1 minute madness first of all. Following this, there was the opportunity for an intensive exchange on all of the data sets in six video rooms – these had been given the titles Sylt, Föhr, Amrum, Pellworm, Langneß and Hooge – appropriate for Germany’s northernmost federal state. You can find videos on all of the data sets here.

The idea pitch, whereby the hackers presented 18 creative project ideas, began immediately afterwards. The pitch was summarised in sketch notes by Karl Damke. The 19th idea was only added on Sunday and could, therefore, not be sketched by Karl Damke. The participants ended the day together at the following open evening. 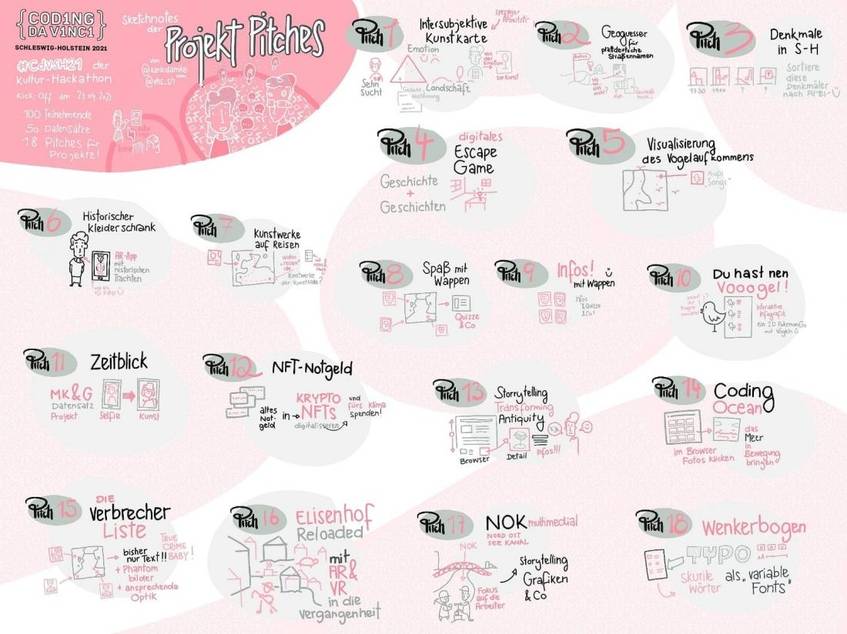 On the second day of the kick-off, the project work began in the teams, in which the first project plans were drawn up and the ideas developed further. Different info sessions took place in parallel, in which participants and data providers were given insights into CdV scholarship projects or were able to expand their knowledge of open data and working with Git.

The sprint phase has begun – developers and coders wanted!

With the end of the kick-off, the sprint phase has been launched. The project teams are still looking for support from people who would like to implement their numerous ideas together with them. Knowledge of programming would be particularly helpful. And completely new project ideas are also very welcome!

If you would still like to take part in Coding da Vinci SH 2021, you can get in touch by sending a short message to cdv [at] shlb.landsh.de. You can find an overview of the current projects here. The data sets can be viewed  here.

The prize-giving ceremony, in which all of the teams will present their results and an expert jury will award prizes to the best projects, will take place on 11th June 2021 at 3 pm. This event will either be held online or in the Schleswig-Holstein Landtag (state parliament). This will comply with the infection occurrence and the current guidelines.

In the meantime, if you don’t want to miss anything on the cultural hackathon in the north, you are very welcome to follow CdVSH21 on Twitter.

The Coding da Vinci scholarships are funded by the Federal Cultural Foundation as part of the Kultur Digital programme.